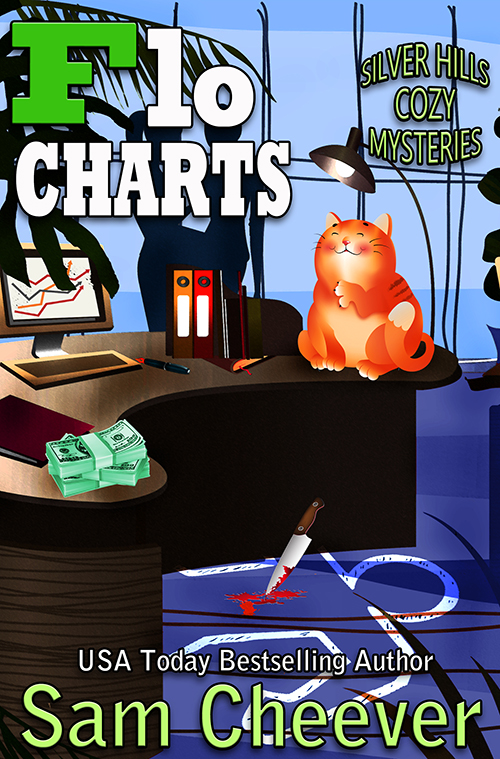 Come to Silver Hills. Where new friends are made and a grim reaper is born.

Agnes Willard is moving into Silver Hills. She’s worried about the change and concerned about fitting in. Luckily for her, Florence Bee has decided to take Agnes under her wing.

When Agnes’ cat Tolstoy escapes as they’re getting Agnes settled into her new apartment, they quickly find him across the hall, perched on a dying woman’s chest.

The new friends soon learn three things from the experience:

1. The cat definitely has an instinct for and proclivity toward people who are on death’s doorstep.

2. Finding and avoiding a killer is a really tough way to spend your first days in a new place.

3. Agnes truly does have a unique talent for debauching a crime scene.

I was snorting into my pillow so much I sounded like my grand dog Nova. People this is a keeper. I went out and bought the paperback this weekend! You need to read this NOVEL it will cheer you up, make you get over the blues and damn will make you walk around with a smirk and half smile for awhile. These characters become you friends and family. I have a lot of people read Flo and Company! They are a treat.

Ms Cheever has done it again! Her Flair for writing hilarious mysteries involving Flo, Agnes and the rest of the gang at The Silver Hills Senior and Singles Residence is 1st rate. The cast of characters are so down to earth and crazy that they will remind you of that relative that we all have that is “a little out there” and always getting into mischief.

Absolutely hilarious! I laughed nearly the whole book through - when I weren't biting my nails and fear for the girls who are no longer spring chicken but definitely sly winter foxes.

There was no sound of footsteps on the tile of the hallway. Nobody called out. There was no hint that they’d been joined by another person.

But suddenly Flo knew he was there.

Her head jerked up and she saw the lean, dark form in the bedroom doorway. She yelped softly with surprise and fear before she caught herself. “You did that on purpose.”

Vladwick, or Vlad as they called him, glided forward, the light from the parking lot beyond Betty’s window catching him just below the eyes and framing the black orbs of his gaze and the slicked back hair with the dramatic widow’s peak.

He looked like something from an old time Dracula movie. Flo half expected him to say, “Good eevvenning…”

But of course, he didn’t. Niceties were not Vlad Newsome’s thing. He glided over to the bed and glared down his long, pointed nose at the dead woman. His thin lips curled contemptuously. “How annoying.”

“I know,” Flo said in her most rigid tones. “It’s such a shame when people die and disrupt your scheduled draining of unsuspecting villagers. Hopefully, it won’t affect your ability to stay ahead of the pitchforks and torches.”

He turned his glare on her. “Are you finished?”

Flo let contempt fill her gaze and focused it on him. “Maybe.”

“Good. Then tell me what you know about this.”

“I’ll tell the police when they arrive.”

His black eyes went wide. “Police? Why would we need them?”

“This woman was murdered,” Celia told him with a little too much relish.

Vlad blinked slowly, like a lizard. “And you know this how?”

Fortunately, Celia didn’t go into the specifics of how she knew. Flo wasn’t sure she could hear it again without hurling.

“Just trust us. She was alive when we were here earlier.”

Vlad peaked a slender black eyebrow, his thin lips twisting with disdain. “You were here earlier, when she was alive?”

Flo turned to Celia. “Do you hear an echo?”

Grinding noises came from the creature standing beside the bed. Flo really hoped he didn’t fracture a fang.