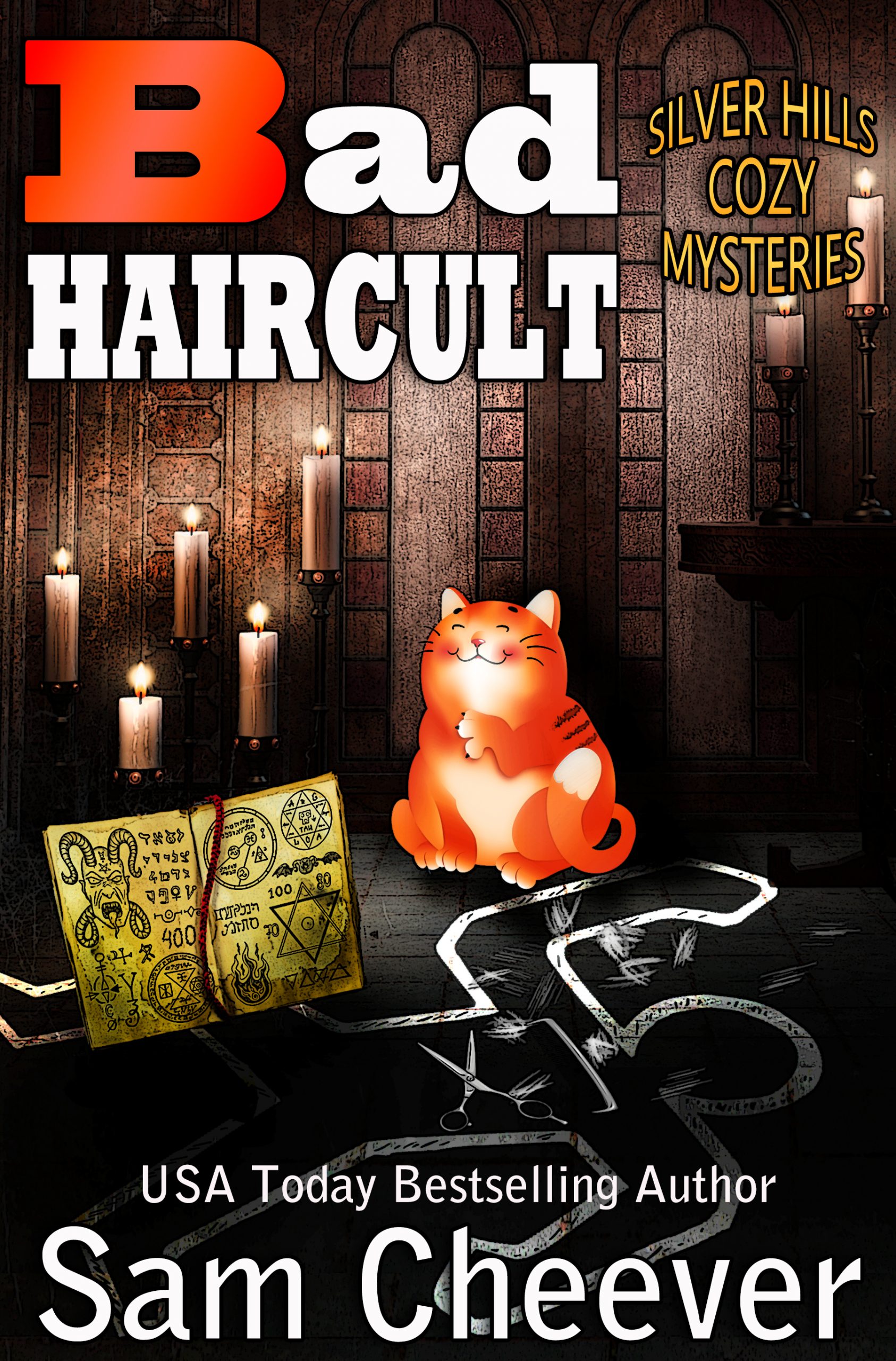 Come to Silver Hills. Where a bad hair day could end up costing you your life.

If you were a “mature” individual with a mighty fine bouff, would you consider shaving your head to solve a case of possible murder? That’s the million dollar question for Flo and Agnes as they find themselves neck deep in missing Satanists, scheming cultists, and a long string of seriously bad hair days. But what’s a sleuth to do when the queen of the night comes to them pleading…erm…threatening…ahhh…pleatening them for help? If you know Flo and Agnes you already know the answer to that question. They’re goin’ in!

OMG Ms. Cheever has done it again. She has written another hilarious book, in her unique style, involving the crazy antics of Flo, Agnes and their friends at the Silver Hills Senior and Singles Residence.

When Morticia, the residences so called vampire/manager, asks for Flo and Agnes’s help to locate her missing friends, they jump at the chance. After all investigations are right up their alley. But what the ladies don't realize is they are going to end up knee deep in the the very dangerous cult world of the White Lightists!

Never ones to back away from a challenge, Flo and Agnes dive into the case head on with a lot of comical situations that only these two could manage to find themselves in. I must admit I laughed until I had tears rolling and my sides hurt at this zany addition to the Silver Hills Cozy Mysteries series or as I like to call them, the Wacky Adventures of Flo, Agnes and the Gang! 2 Thumbs Up for a highly recommended suspenseful yet funny read!

Flo and Agnes are back! Need I say more? This time, they're helping their 'favorite' vampire, ah, er, night manager Morticia discover just what happened to some missing people at Morty's Satanist Church. Let the hilarity begin! Hollywood, take note: Flo and Agnes and their friends at the Silver Hills apartments would make an excellent TV/ TV movie series.

No Satanists or vampires were harmed during the writing of this novel, although my sides were split a few times in laughter. This novel needs a spew alert on the cover; drinking a beverage while reading is not recommended.

This is my favorite book of this series and of Sam Cheever's books. The suspense and humor keep the pages turning. I started reading this book the evening I received it and didn't/couldn't stop till the end in the late hours. Well worth it. Ready for book 4 !!!

Flo pumped her arms and blew air out in a gust as she neared the top of the hill. She had a decidedly unladylike sheen on her face but she was starting to feel like she might actually survive the walk.

Unfortunately, not too far behind her, an exercise failure of epic proportions was happening. In fact, as she threw a look over her shoulder to make sure the sounds she was hearing weren’t actually from a buffalo giving birth to a rhinoceros, she realized the failure had already happened. She stopped and turned back to Agnes, hands on hips. Her friend was draped over the hood of somebody’s car, her round belly heaving and quivering as she tried to force air through her lungs. “Agnes Willard, you’re in terrible shape.”

Agnes didn’t lift her head, but if her neon red face was any indication, she was at the end of her endurance. “I don’t care what the stupid doctor says, I hate walking.”

TC hailed them from a couple blocks up and Flo waved her off, realizing the rest of the group would have to go on without them. “Your blood pressure is too high, Agnes. If you don’t want to stroke out you need to get in shape and bring it down.”

Agnes shoved off the car and bent forward, her skinny legs quivering as she panted for air. “That’s what they make drugs for, isn’t it? I’ll just take bigger pills.”

“Not a good plan, fool.” Flo frowned. She was actually worried about her friend’s health so when TC had suggested they join the thrice weekly walking group she’d jumped at the chance. Unfortunately, she hadn’t counted on her friend’s rabid resistance to the idea. “You lift weights and use the treadmill. I don’t understand why walking is such a chore for you.”

Agnes fixed a bloodshot eye on Flo, her graying brown pageboy sticking up around a wide hairband that was dark with sweat. “Lifting weights only requires muscles. I have those in abundance.” She patted her well-rounded behind as if presenting evidence of muscle. “But these here are fast twitch muscles. They’re for strength more than endurance.”

Flo eyed the “muscles” her friend indicated, one eyebrow creeping skyward with skepticism. “There’s definitely some twitching going on back there, but I’m not sure it’s muscle.”

Agnes blew out a breath and limped toward Flo. “What I’m trying to tell you is that I’m a sprinter rather than an endurance runner. I’m out of my league with this long, drawn-out walking stuff.”

Flo slid her gaze down the street to the Silver Hills Senior and Singles Residence, the other eyebrow creeping northward to join the first one. “You know we’ve only gone a block, right?”

Agnes peered down at Flo, one eyelid twitching. “That’s at least a block and a half.”

Flo shrugged. “Whatever. Come on. We’ll walk slower for a while.”

Grunting and groaning, Agnes ambled along next to Flo. “I’m serious about the drug thing. There has to be a stronger blood pressure pill that would keep me from having to do this.”

“What about the diet the doc put you on?”

Agnes blew out a raspberry. “You think I’m giving up pie?” She shook her head. “I’ll take a pill as big as my head if I need to. I’m not giving up pie.”

“Good idea,” Flo said eagerly. “We’ll just pump massive doses of drugs into you so you can sit on your boohind and eat donuts and pie.”

Sarcasm flew past Agnes on silver wings. It avoided her like she was coated in Teflon. She wouldn’t recognize a sarcastic remark if it jumped onto her boohind and twitched in time to Stairway to Heaven, Agnes’s favorite song.

She nodded. “That’s the kind of health plan I can get behind.”

They walked in near silence for a moment, the quiet only broken by the sound of that buffalo giving birth. Several blocks away they spotted TC and the rest of the group stretching in the park. The halfway point. “Look, we’re almost there.”

“Where are you going, fool?”

“Agnes, come on. We need to finish the walk. Besides, you need to stay away from Cook and her pies for a while.”

Agnes lifted one hand over her head in a wave but didn’t stop or turn back. In fact, she seemed to have found renewed energy and was moving back toward the residence at a much faster clip than she’d used coming away from it.