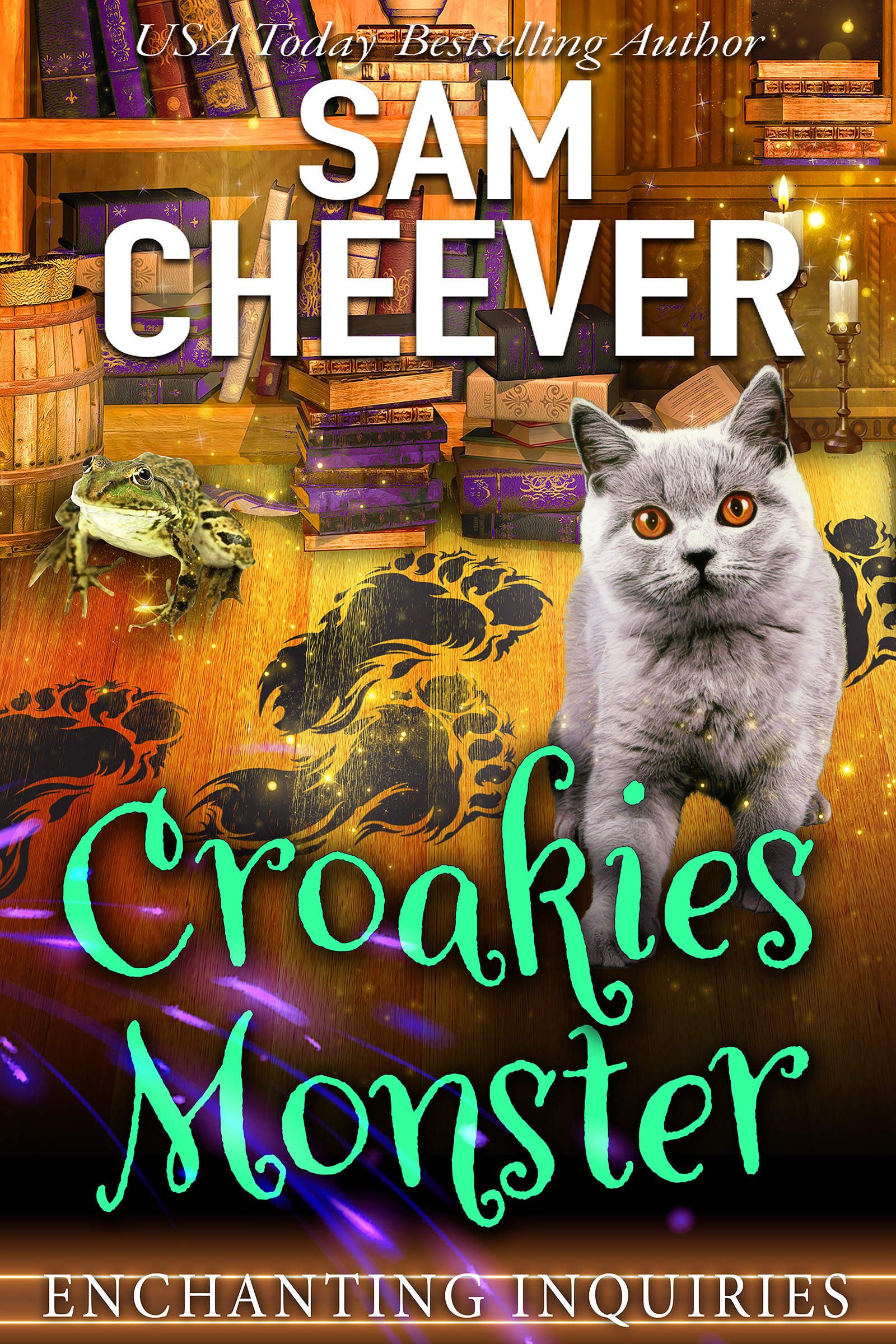 Ancient Chinese proverb says, give cat mouse and give frog fly, they'll soothe your monsters so you won't die.

Okay, maybe I just made that up. But I'll try anything at this point.

Croakies is suddenly being overrun by monsters. Yeah. Monsters. And I have no clue where they’re coming from. Are they tied to something we’ve done in the past? Do they have anything to do with the strange phone calls I’ve been getting from a really prickly local author? Most importantly, how are we going to explain to the humans about the appearance of a certain giantnormous blue monster flinging car-sized cookies around? Where did all these squirrel squattin’ songbirds come from? And, for the love of the goddess’s favorite spanks, why is there ice all over the floor?

The frog and the cat? Yeah, they’re really pretty useless on this one. But at least they’re living the good life thanks to my tireless efforts to feed, house, and clean up after them and their naughty friend Hobs.

Mega monster boogers! This magic wrangling gig is for the birds. And the frogs. And the cats. And the hobgoblins. And, apparently, for the monsters hiding at Croakies.

I am so absorbed by this series. Each book gets better, more intense and completely capable of drawing you in and not letting go until the very end! Will they find the source of the monster invasion? Will they be able to fix the problem? Will everyone survive???? This book is like a thrill ride throwing you wildly around twists and curves, ups and downs and just when you think you have a minute to catch your breath, BOOM!!!! I'm exhausted!! I've preordered the next book in the series! In the meantime, I need a nap...and a big chocolate brownie with fudge frosting with a cup of tea and maybe some ice cream! Ribbit!

Loved this! Sam Cheever has done it again with this series. Rekindling friendship, monsters, mayhem, excitement.....what a combination. This series has become one of my favorites to read. Nadia and friends sure have their work cut out for them in this book. Can't wait to see what else this series brings!

I rubbed my forehead, trying to soothe the perpetual headache caused by the nearly constant clanging of new orders popping up, and reached out a hand to catch the sheet of paper drifting downward from thin air.

I caught the page without looking at it and shoved it to the bottom of the growing pile on top of Shakespeare’s desk.

Sebille came up behind me, stuffing another thin stack of orders beneath the one I’d just received.

Thank goodness Lea had found a way to mute the sound of new orders arriving, or I’d have gone totally batty from the almost unending barrage. It seemed that whatever we’d done during our recent trek to the dimensional buffer Plex had realigned something in the Universe and a backlog of artifact collection orders I hadn’t even known existed had come unclogged and were burying me in work.

I made notes on the order I was currently reviewing and added it to a folder of ten retrievals I planned to attempt as soon as I had my breakfast.

Sebille would leave Croakies with another ten orders. With any luck, we’d each get through half of the planned orders for the day.

Then we’d get a few hours of sleep and start all over again.

I fought despair, feeling as if I was going to die buried under a pile of magical artifact orders.

My head shot up at the sound of a high-pitched screech, surprising a small yelp out of me. Hobs slid past, feet spread and arms akimbo as if he were skiing down a mountainside. His blue eyes were wide and alight with pure joy as he slid past me, my cat Mr. Wicked hot on his trail.

I turned in my chair and watched as Hobs lost his balance and, feet sliding around underneath him, toppled sideways and landed hard in Casanova’s perverted chair. A beat later, he flinched, flew into the air, and crashed back into the chair with another shriek of joy. “Again!”

Shaking my head, I turned away. I picked up the folder I’d been filling with orders and stood, stretching my aching muscles. I’d been working almost non-stop, twenty-hour days, trying to get caught up on the backlog of orders. My vision was blurry and my bones were tired and I had a brand-new array of bumps, bruises, and scratches from my efforts.

My gaze slid to the pile of new magical artifacts across the library. Sebille and I had started out organizing them carefully on top of a thirty-foot-long special wooden artifact table that usually stood mostly empty. But as we’d become overwhelmed, we’d quickly fallen into the “smile and pile” method, and the table was looking pretty chaotic at the moment.

“Again!” Hobs yelled as the chair pinched his scrawny bottom, and he leaped into the air with a delighted shriek.

Wicked was tucked into a prim sitting position at the bottom of the chair, feet neatly arranged near his fuzzy bottom and tail wrapped tidily around them. His head lifted and lowered each time Hobs made the trip from chair to air and back down again.

I bit down on the desire to scream at the boisterous hobgoblin. It wasn’t his fault I was tired and cranky. He was just having a little fun.

I took a step toward the stairs leading to my apartment above Croakies, my mind already on the retrieval jobs ahead. My foot slipped out from under me.

I gave my own little shriek as my feet slid apart, and I went down, arms akimbo and papers sailing out of the folder to fall around me like giant, rectangular snowflakes.

I lay there with my legs splayed in painful splits and groaned as I took stock.

Yep, all body parts accounted for.

I rolled over and tried to push myself off the ground. My hand slipped over a patch of…ice?

“What in the name of the goddess’s Sunday best…?”

I looked up at the sound of clomping footsteps and found Sebille frowning down at me.

“Why are you sprawled all over the floor, Naida?”

Compassion thy name is Sebille.

“I fell. Slipped actually. On this patch of ice.”

“This ice right here…” I ran my hand over the spot where the ice had been, and it was gone. “I swear it was here a minute ago.”

Sebille scoffed. “Sure it was. Somebody needs to get more sleep, I think.”

She wasn’t wrong. I was dead tired.

Shaking my head, I pushed upright. “I’m going to go take a shower and have a really strong cup or three of tea. We should get going early today, that Groundhog Day alarm clock artifact is set to go off at nine AM.” I gathered up the orders I’d dropped. “Some poor derf is about to relive Groundhog Day for about the fiftieth time.” I felt his or her pain. In fact, I was starting to feel as if my life at Croakies was its own version of Groundhog Day.