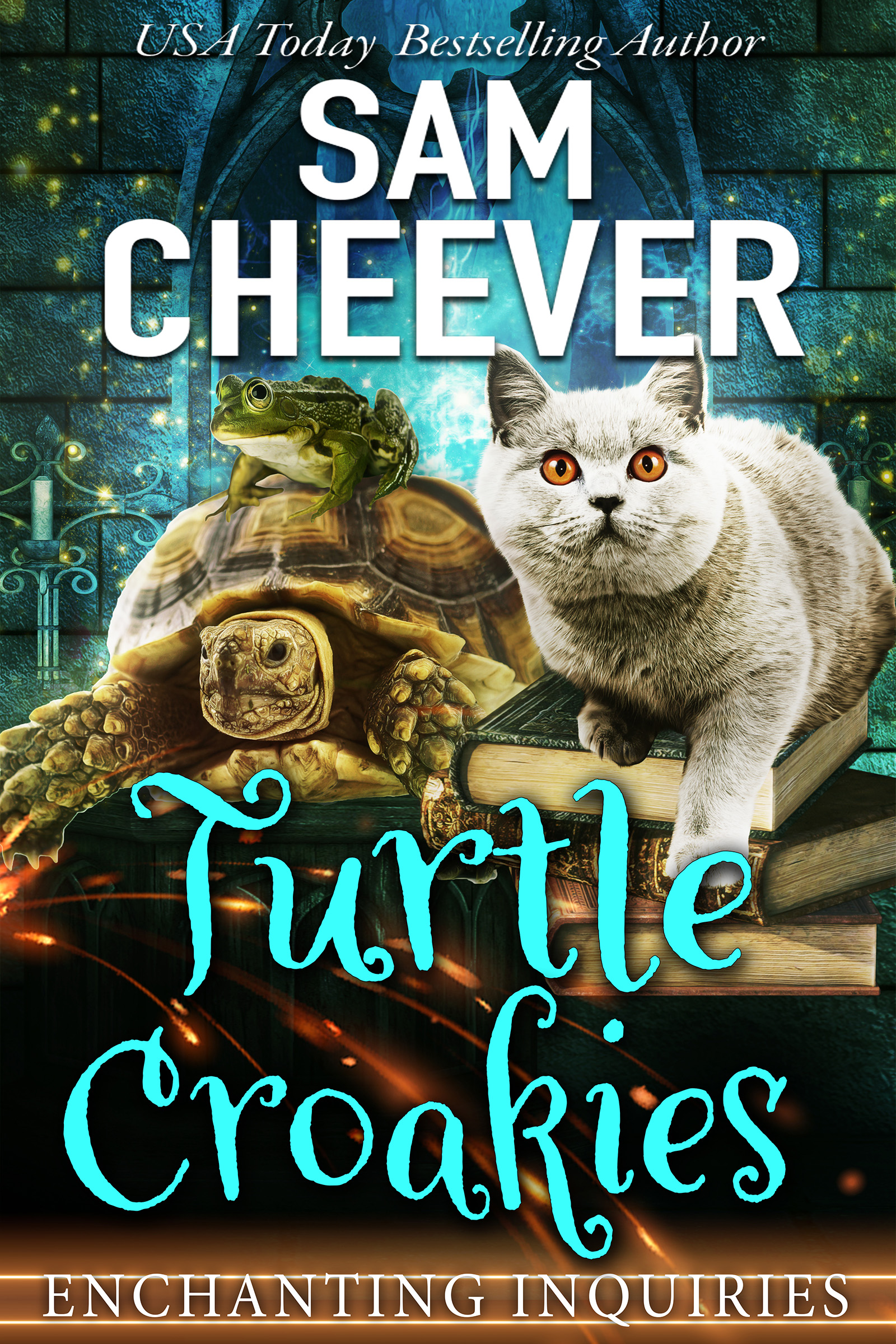 A frog, a cat and a hobgoblin walk into a bar…in the Jurassic period. Nope…not kidding. Okay, maybe it wasn’t really a bar. But it was definitely the local drinking establishment. For dinasaurs…

My old mentor, Alice Parker is back, and she’s brought a problem with her. A big one. One that’s already testing the sprites’ ability to keep it in alfalfa and dandelions.

It turns out that Alice has been on the run for a minute, trying to protect a magical tortoise from an ancient sorceress who wants it for herself. You might be wondering why anybody would want to steal a tortoise. Well, if you had the chance to travel through time at the push of a button, or rather the press of a turtle’s shell, would you take it?

Yeah, me neither. I have enough trouble dealing with this time and world… But clearly we aren’t all diabolical magic users bent on our own empowerment. I mean, the possibilities for evil are unending if one can time-hop at will.

Luckily, I have two cats, two frogs and a hobgoblin to help me stave off the latest crisis. The only question is…what am I going to do with a former KoA who was as ineffectual at the Keeper’s job as the goddess’s ripped pantyhose are at holding water. The only thing she’d been worse at was training me!

And, more importantly, now that she’s here…how am I going to get rid of her?

Holy turtle trousers, this Keeper gig gets tougher by the day…or the millennia! I didn't know how much I missed Croakies, till I was reading this book. Nadia, Sebille, Wicked, Hob, Grimm and the others are an amazing family that I truly enjoy spending time with.
This story takes us deep into the Jurassic Era, Enchanted Forests and into Nadia's past. I simply can't wait for the next one.

I love this series and this book is no exception. A time-travelling turtle, the Jurassic period, magic, mayhem, and chaos. Is there anything Naida and Grym can do to set things back to normal?

We should have never left Croakies unattended. I realized that now. But when I get an order to retrieve a cursed girdle that makes its wearer gain instant weight and then resists being removed, my personal sensibilities wouldn’t allow me to put off its retrieval.

I had trouble enough with my own weight to ignore such an unkind artifact. And no, it had nothing to do with the donuts, tacos, and brownies I eat on a regular basis, I assure you. I was born with a slow metabolism.

It could have just as easily been me donning that cruel latex and magic prison as the woman who’d been trapped by it.

And, to be fair, I’d had no way of knowing it would take me and all of my friends three hours to pry that poor woman out of the grabby girdle. If Rustin hadn’t thought of the flame thrower option, we might still be fighting with the thing.

It’s not as bad as it sounds. The woman will recover from the second-degree burns. But she wouldn’t have recovered from instantly gaining fifty pounds.

I mean, who would? One needs to build up to that kind of thing, via lots of tasty goodies.

Imagine my surprise when we finally returned to find Croakies had been infiltrated.

I stared at the monster in the center of the bookstore, some of the tension leaching out of my muscles as it stared back at me, its jaws lazily munching the lunch salad Sebille had thrown at it.

My lunch salad, blast her evil sprite ways. Like it wasn’t hard enough trying to lose weight. Now she was throwing my tasteless, diet lunch at every Tom, Dick, and Turtle who wandered in off the street.

The sprite was crouched near the small refrigerator where she’d pilfered the ill-gotten garden castoff. She held Mr. Slimy in her hands, clutching him close in case the monster decided the little green squish looked good enough to eat.

Standing near the door that divided the bookstore from the magical artifact library in back, my friend Rustin had his hands on his hips and was observing the creature with mute fascination.

Our resident hobgoblin, Hobs, was perched on top of the nearest bookshelf, his eyes the size of soccer balls.

“How in the world did that get into the store?” my best friend Lea asked. “And what in the wide, wide, world of witchery is it?”

Lea was standing on top of the table, towering above us in a frothy skirt that vibrated as her knees bashed together. Her hands were out and green-hued earth-witch energy danced on the tips of her perfectly painted fingernails.

Sebille’s gaze slid Lea’s way and she rolled her eyes. “Haven’t you ever seen a turtle, witch?”

I got the impression Lea would have glared at my cranky assistant, but that would have required that she shift her gaze from the monstrous turtle for a beat. And the world would be overrun by three-legged caterpillars before that happened.

We ignored him because if we didn’t, another giant argument about his Encyclopedia Magica ways would commence, and then we’d be off on a roller-coaster ride of verbal frog flogging for the next hour or so, completely forgetting about our unexpected and unwelcome visitor.

Suffice it to say, Slimy had grown fond of gaining the knowledge he’d missed out on in his early years when he’d been a simple frog. And enjoyed thrashing us about the head and shoulders with what he’d learned nearly as much.

In the past months, he’d gained the ability to think, speak, and read like a real person from having housed Rustin’s soul inside his squishy green frame. According to Rustin’s powerful aunt, who was also a witch, the obnoxious green squish had absorbed some of Rustin’s magical energy.

And the result? The frog was special. It was true. Just ask him.

“Of course I’ve seen turtles…” she slid a quick glare toward the frog, “tortoises, before. But I’ve never seen one that was as big as Naida’s car before.” She squinted at the monstrous creature. “Or one with that particular coloration.”

To be fair, my car wasn’t really that big. It was a VW bug. Small but loveable. Still, she wasn’t wrong. The tortoise was nearly as big as my car.

“I’m just wondering how it got through the door,” Rustin said, his piercing blue gaze sliding toward the aforementioned door. “Even if you tipped him on his side, he wouldn’t fit.”

“What’s with the different colored patches on his back?” Sebille asked, frowning. “He looks like somebody painted him.”

I tilted my head, moving a few inches closer to examine the thick, wrinkly legs. “He doesn’t look like he’s made of metal.”

“Apparently, neither do I,” I shot back, glaring in her direction.

She rolled her eyes, putting a little extra disdain into the action to show me how much she didn’t care about my lost lunch.

A toilet flushed and we jumped, all heads swiveling toward the bathroom door near Rustin. It opened a moment later, a woman walking out as she rubbed her hands dry on her long wool skirt.

“Oy, that’s better,” the woman said, shoving a pair of tortoiseshell spectacles back up her pugnacious nose and blinking at us from behind the thick lenses. “Sorry, we passed through Mexico on the way here, and I drank some of the water.” She shook her head, the fluffy brown mess looking even less tidy than usual, taking care not to dislodge the brightly hued form perched behind one ear. Oliver, her tree frog, peeked out at us from within the brown mess. “I say, Naida, dear. You don’t happen to have a spot of tea you could offer a weary traveler, do you?”

An enormous black cat trotted from the loo behind her, looking even rattier than the last time I’d seen him. Fenwald. The tatty black cat spotted me and gave a happy yowl, trotting heavily across the carpet to fling himself at my legs. I nearly went down under his prodigious bulk. Bending down to rub a hand over Fenny’s torn ears and unkempt fur, I said, “Hello, buddy. How are you?”

“I’m afraid he had a bit of a chunder on your rug in there,” the woman told me impatiently. “Do be an angel and clean it up, won’t you?”

I had no idea what a chunder was, but it didn’t sound good. Pain shot through my jaw and I realized I was clenching my teeth.

I couldn’t believe she’d just shown up at Croakies without any warning. And allowed her cat to chunder in my bathroom to boot.