Beauty isn’t only fleeting, it can actually be deadly!

My favorite customer, Mrs. Foxladle, finds herself at odds with her book club friends over a curious obsession with youth and beauty. While the disagreement seems to have saved the octogenarian from being returned to the earliest moments of her existence…literally…it isn’t doing anything to keep her from looking guilty for the deaths of her friends. There's no doubt in my mind I’m dealing with a rogue magical artifact in the hands of someone with diabolical intent. Unfortunately, I have no idea how to find either the artifact or the person wielding it.

It will be up to me and Detective Grym to find the culprits. Except that, Grym’s timetable might just be a bit on the wonky side too. Which leaves solving the mystery up to me and my friends.

It's just a really good thing I have a cat and a frog and… Yeah, about that… I’m really no closer to figuring out how to use them either. Troll boogers! This magic wrangling stuff is hard! 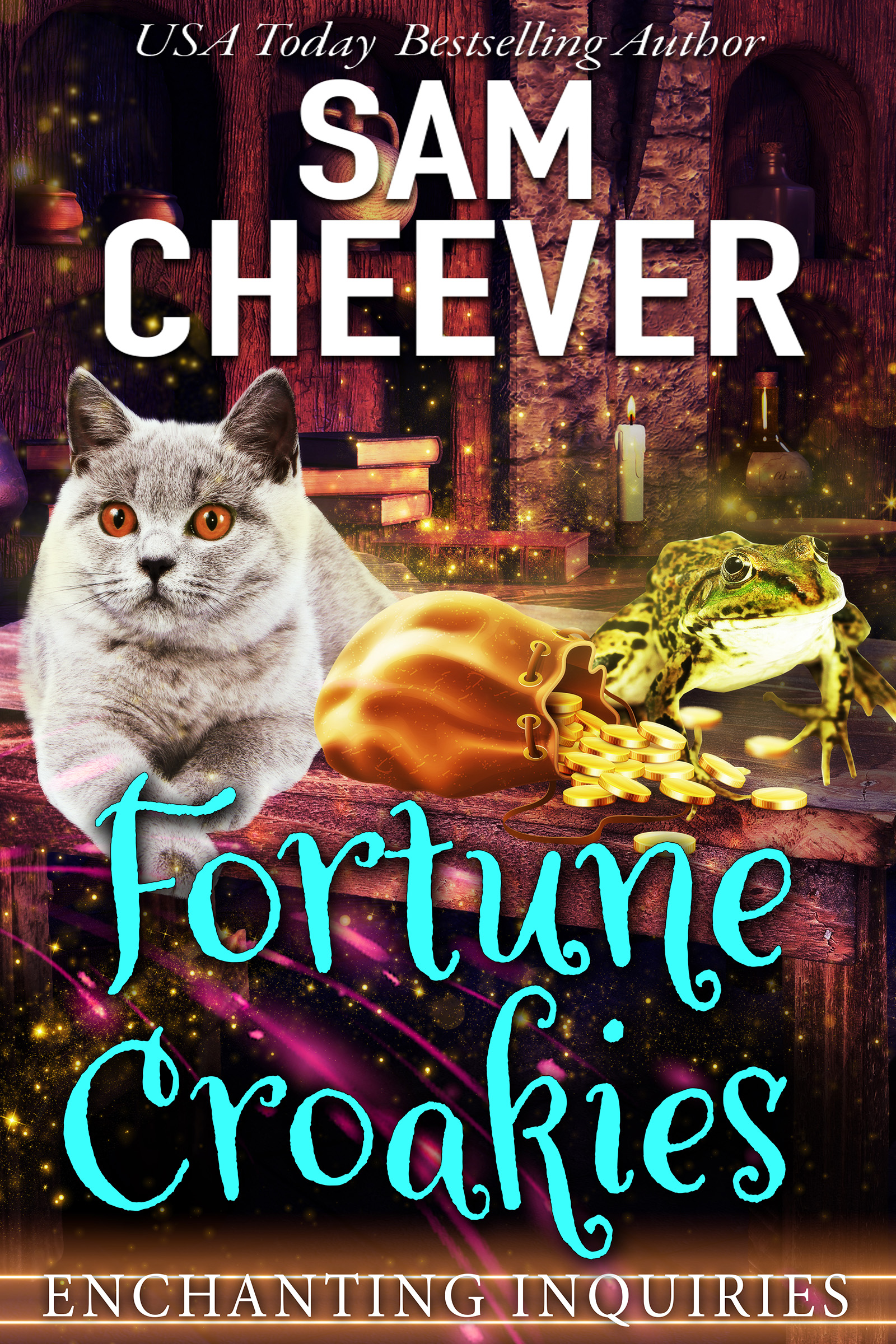 I absolutely loved Gram Croakies! This is the third book in the series and each book gets better and better. The paranormal world that the author has created is well crafted, complex and well thought out. There is so much mystery, suspense and lots of laughs. This book finds us adding a new character to the mix with new powers. I could not put this book down. This is a page turner filled with delightful magical surprises. I cannot wait for the next book in this fantastic series!!!

I found this series with this book and what a Hoot! I loved the characters and the storyline. There never was a dull moment. I'm definitely going back and starting at the beginning!

It’s so Hard to get Good Staff These Days!

To say that chaos had descended on Croakies while I was gone would be too gentle a statement. What I walked into was well beyond chaos, bordering on apocalyptic. And I’m sorry to say that my usually competent assistant wasn’t handling it at all well.

I opened the door and stepped inside the store, looking up at the strident clang of the bell above my head.

The bell usually gave off a soft tinkle. A pleasant sound meant to warn me when someone came into the shop. Nothing like the screechy clang I’d just been greeted with.

I was reaching for the charred and dented mash of metal, my thoughts roiling in search of an explanation, when Sebille screamed at me. “Duck!”

Sebille’s usually calm and snotty tone was neither calm nor snotty. In fact, it sounded panicked, and it startled me into reacting immediately.

A silvery bolt of energy burned through the air right above my head, sizzling against a wayward, wind-blown strand and leaving behind the sour stench of burning hair. The bolt of energy slammed into the door, etching a char mark into the heavy wood and pinging harmlessly away.

“Dervish dimples, Sebille! What in the universe is going on?” Hitting my knees, I reached back and locked the door so no unsuspecting customers could come through.

My assistant made a strangled sound, and I jerked my gaze toward the dividing door between the bookstore and the artifact library in the back.

Sebille’s slender form was framed in the open doorway, her striped-sock-clad legs spread to press against either side in a clear attempt to keep her from being propelled forward. She’d flung one arm to the side and had a death grip on the frame.

Her freckled face was pinched, her pointed ears red enough to match her fiery hair, and her shimmering green eyes looked ready to pop out of her face. “This thing’s out of control…” she managed to pant out, her arm shooting into the air and sending another silvery bolt of energy into the bookstore ceiling.

Plaster dust sifted onto my head, the ceiling broken and scorched from the destructive magic. Chunks of glowing embers sizzled where the magic had sheared off a chunk of the wood beneath the surface.

The object clutched in Sebille’s hand spit sparks and emitted a high-pitched buzz like a dying hive of demon bees. A green orb was anchored into the tip of the staff by a twisting maze of black metal and thorn branches. It glowed brightly, pulsing in time to Sebille’s own green orbs.

I shoved to my feet and started toward her. “Troll boogers, Sebille. What are you doing with Maleficent’s staff?” The staff swung in my direction, and I barely managed to dive out of the way before the magic arrow it threw seared a path toward the wall behind me. The explosion sent chunks of drywall into the air in a shower of debris that thumped down all over the floor, the books, and me.

“You need to drop it, Sebille!” I screamed.

She gritted her teeth and shook her head. “I can’t,” she hissed out. “It’s trying to escape.”

The staff re-aimed itself toward the ceiling and sent two barrels of energy into the light fixture, exploding it into a blizzard of falling pieces. Tiny shards of glass rained down, peppering me with painful stabs and burning abrasions as they fell.

The staff shot downward again, fighting Sebille to focus its bile on me. I felt my eyes go wide. “Um, Sebille.” I stepped sideways, and the staff followed me. “Sebille!”

“I…can’t…” Her face was purple with strain. She let go of the doorframe and used both hands to clutch the staff. Her upper body swayed forward, tugged by the artifact into the room. Only her feet braced against the framing kept her from flying right at me with the staff at the helm.

I looked at the sales counter, trying to judge if I could make it behind the barrier before the staff fired at me.

It would be close. But other than that, all I had were the bookshelves. I really didn’t want the stupid thing blowing up my books.

Then movement caught my eye and I turned, horrified to see Mr. Slimy hop out from between the shelves, black eyes bulging. He stopped and looked at me, his throat pulsing as he sized me up.

My gaze jerked around and horror sliced through me, turning my gut to mush. “No!”

The staff was pointed at Mr. Slimy, the green orb pulsing with power it was about to fire into the unsuspecting frog.