A Bounce Before I Die 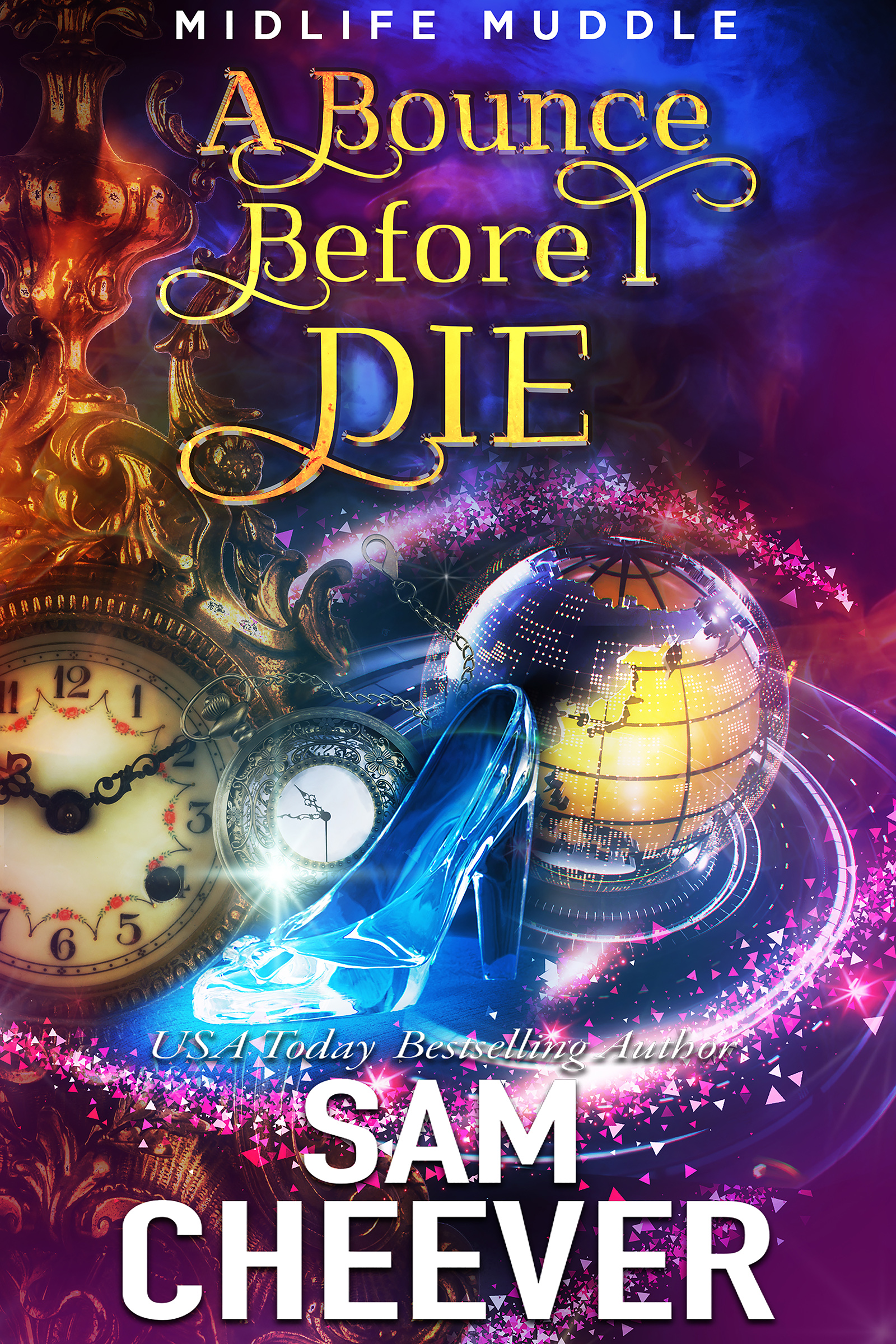 My best friend had nothing to do with bouncing or monsters until something went terribly wrong in my new job. Suddenly she’s missing, and the rumor is that a nest of monsters might have her. Those monsters are about to meet their match. I’m going to go medieval on their furry butts. If only I could figure out how to control my bouncing magic for five solid minutes. I have no idea how I’m going to save Molly if I can’t stay in the right dimension long enough even to form a plan.

Whatever I end up doing, I just hope she’ll forgive me for bringing her assistant Rog along on the rescue mission. I’ve tried to shake him. But he’s like a giant octopus with a thousand tentacles. I wonder how well he can swim...

Praise for A Bounce Before I Die

Please enjoy this unedited excerpt of A Bounce Before I Die:

Give the Rat Some Cheese

“Rog, I swear to the goddess I’m going to throttle you if you don’t step back.” Molly’s assistant cocked a bony hip and fixed his expression into a look of disgust a drag queen would envy. “We’ve had this discussion a thousand times,” he said in a thoroughly disgruntled tone. “I’m right and you’re wrong. There’s nothing more to say. Now step aside grasshopper and let the sensei do his work.”

I grabbed the nearest board and brandished it in his direction. “Step back Lackofsensei. You are physiologically and emotionally ill-equipped to assemble this desk.”

Hands on hips, the pushy assistant glared at me, his brown eyes bulging with rage. Both of us around five feet seven inches tall, we met eye-to-eye across the battlefield, Molly’s Spring designs surrounding us like fancy cloth soldiers. “Woman, you rarely make any sense. But that excrement is beyond ridiculous. Why would I be ill-equipped to tackle this simple project?”

I snorted to ward off a barrage of snarky responses. He’d really left himself open on that one. But I took the high road…or as high as it was possible for me to go at the moment…and simply said. “Everybody knows that the male of the species doesn’t read directions. And, while I’ll admit you barely qualify as male, I refuse to allow you even the idea of entrance into club woman. You aren’t nearly smart or classy enough for that.”

Rog launched himself at me, his bony frame hardly even causing a strong air current as he bumped me, and latched onto the side board we’d been struggling to assemble onto what was starting to look like a desk for an alien. Things stuck out from strange places. We’d run out of screws and bolts five minutes into the project. One of the drawers could actually be in backward. And there was a strange slit in the desktop that I was pretty sure wasn’t supposed to be there. The thing might as well have been made for ET, since I was pretty sure the assembly directions had been written by little green men.

Yeah, I know, I’d just accused Rob of not following the directions. But there’s a difference between reading and not understanding a set of badly crafted instructions, and not even bothering to look at them. Rog, like every man I’d ever known, seemed to think his penis was some kind of divining rod that would magically point him to the successful culmination of every assembly he attempted.

A tiny woman swept past us in a wave of flowery scent and glossy black hair. Molly rolled her eyes so hard I was afraid she’d crack her eye sockets. “Sweet Cherubs on a crescent moon!” she exclaimed on her way by. “You two are worse than my sister’s teenagers. Just leave it. I’ll put the thing together after I finish doing everything else you were supposed to do today.”

Her diatribe shamed me and I frowned, staring at the enemy across from me and trying not to picture his nose twitching over his big, rat teeth. I sighed, extending the board in a gesture of goodwill. If I’d cocked my arm into smacking form in the initial offering, you’ll have to forgive me. I’m only human after all. “If you can figure out where this goes, I’ll take back my mean thoughts about men and directions.”

Rog crossed his arms over his skinny chest and glared at me. “What about the mean thoughts you were having about me?”

I curled my lip. “Don’t ask for the impossible.”

A soft sigh travelled in our direction from across the room, where Molly was pulling racks of designer duds around in an attempt to perfect the showroom’s feng shui.

I 'd opened my mouth to relent when the rat-face from seconds before reappeared, the tiny black eyes and nasty mouth slashing past inches away from my face on a shriek and a hiss.

“Ah!” I yelped, caught off guard. A beat later, I realized what was happening. “No, no, no, no, no!” I chanted, reaching frantically for the place of serene control Justice had been trying to help me find.

Another rat joined the first, the two of them mere inches from my face when they leaped into the air. I ducked as the vision sifted away into nothing, fighting to concentrate on my control.

“What are you doing?” Rog asked in his usual nasally tone.

“Huh?” I asked stupidly. Shaking my head, I clenched all my muscles as if that would keep the bounce from coming. That, actually was the exact opposite of what Justice had been trying to teach me.

His deep, sexy voice slid across my thoughts. It was almost enough to distract me into calming the heck down. Close your eyes,” his sonorous voice intoned in my head. Take deep breaths. Think about easing into your bounce rather than being ripped into it.

“You look like a toddler trying not to pee her pants.”

My eyes snapped open. “Pee,” I said, then nodded. “Yeah, I need to pee.” I pointed toward the restroom at the back of the big room. But before I could turn away, Rog’s face turned ratty again. I still had hopes that I could clamp down on the bounce until his mouth opened and he hissed.

Snatching the board away from Rog, I took off. I dove behind a rack of faux-farmer fashion just as the bounce grabbed hold and ripped me into the next world, one hand wrapped around a pair of white denim overalls with bling on the front that was shaped like a pocket.

I slammed into the ground, skidded three feet on my knees, and barely managed to throw myself backward to keep from crashing into a flag pole.

A distant chorus of hissing greeted me as I slowly climbed to my feet, followed by the drone of wet panting and heavy footfalls which were quickly heading my way.

I leaned over and put my hands on my grass-stained knees, groaning. White denim flapped in my hand and I glared down at the piece of clothing, noting the mud stains that hadn’t been there when I’d grabbed on in a full panic. I was going to have to pay Molly back for the damaged outfit. “Grrrr!” I said, realizing I’d been doing a lot of growling lately. Either I was morphing into an animal, or I’d been hanging around Elvo too much.

Right on cue, the darkness leaped in my direction. Scary red eyes glowed eerily as an enormous, furry form leaped up and planted massive paws on my shoulders. I grimaced as a huge red tongue slathered me from chin to hairline and gagged at the putrid stench the doggy kiss left behind. "Ugh!" I whined. "Dog breath." Elvo barked happily, bouncing around my feet in frantic canine bliss.

Another form stepped out of the darkness and my mind went blank as I slid a hungry gaze over a man who could only be described as tall, luscious, and sexy. A former cop in my fifties, I'd spent a lot of my life looking for justice. But I'd never known finding it could be so inspiring.