One Bounce away from Crazy 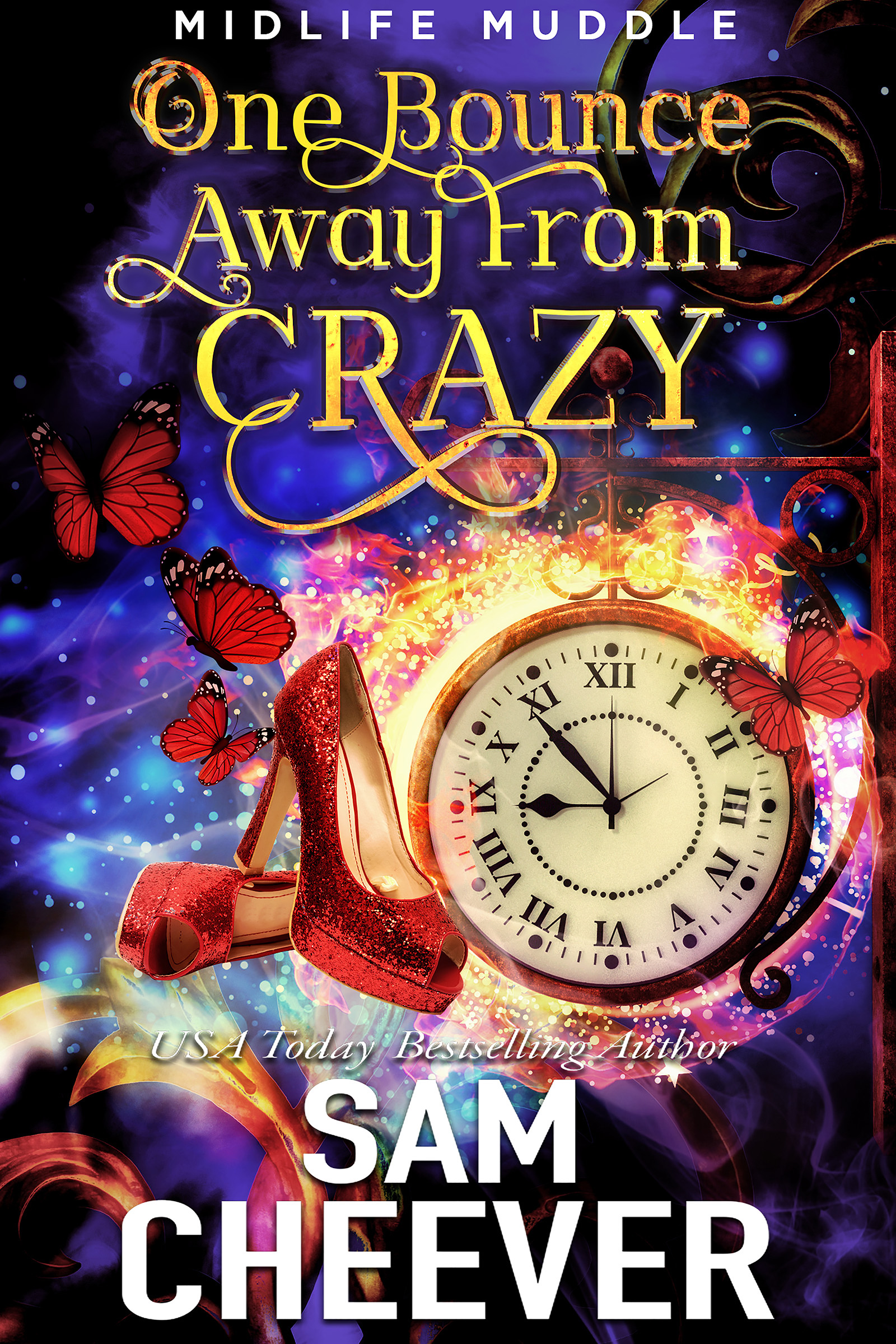 I always knew my shoe obsession would be the death of me. But I never guessed that murder would be involved.

My name is Raelynn Kitt. My friends call me Rae. My ex calls me Kitten, which is only one of the many reasons he’s my ex. But that’s not important. I have a confession to make.

There are no church basement support groups for my addiction. No first-year chips to mark my progress in kicking the habit. Which wouldn’t matter anyway since I haven’t conquered it.

In fact, I blame my addiction for the recent chaotic turn of events in my life. Yeah, Karma is a jerk, and she just took a chunk out of my backside.

All because I couldn’t walk past that cute little shoe store on the corner of Main and Fetter.

That was where a woman popped out of nowhere and died at my feet. Where the last words out of her mouth were to call me a Traveler. Hm. Then there’s Justice. Not a legal concept, but a man who makes my heart stop for good and bad reasons. He thinks I’m a Traveler too. We’re not talking about the packing a suitcase to go to the beach type of traveling.

Oh no. His kind of traveling involves monsters and visions.

I don’t like his kind of traveling. But it’s starting to look like I don’t have a choice in the matter.

Am I a Traveler? Dancing goddess in yoga pants, I hope not.

"One Bounce Away from Crazy is a fantastic book. It is interesting and full of adventure. I really like the characters. They are quirky and interesting. This is a wonderful new series. The book is well written and engaging. I really enjoyed this book and highly recommend it." JEN16- Booksprout Reviewer

Praise for One Bounce Away from Crazy

Fun! This is a great paranormal/urban fantasy.. I liked it a lot.. It is fun and fascinating, interesting and clever.. Cool characters.

WOW! This was a fantastic story line! I was at the edge of my seat thru out the book. An ex police lady is unexpectedly tossed into a realm of others and finds herself 'employed' in a dangerous new job. Each character we meet is more interesting than the last, and Ms. Cheever even tossed in a totally unexpected ending. I sure hope we can enjoy more of Traveler Kitts' adventures.

“I’ll take them both.” Even as I said the words, I could feel panic flaring in my chest. Two more pairs of shoes. Two more expensive pairs. I was so out of control. If I kept up my current buying cycle, I’d have to remove furniture in my small apartment to make room for my shoes.

Maybe I could array them along the windowsills, like odd knickknacks. But then I’d have to dust them.

The thought set my knees a’knockin.

“That will be two-hundred-forty-two dollars and twenty-five cents.”

I choked, quickly covering my lips with a fist and coughing delicately.

“Do you need a cup of water?” the petite, purple-haired twenty-something asked snidely.

“A…” I cleared my throat. “Allergies.” I handed over my much-abused credit card, hoping its little silver tongue wasn’t out and panting.

Despite my concern over spending the money, I held my breath until the sale cleared, suddenly sure I’d drop dead if I didn’t get the cute little pearl wedgies and the adorable sneakers with frayed edges.

The purple-haired young woman grabbed my receipt, smiling up at me. “Receipt in the bag or with you?”

“In the bag is fine,” I answered by rote. I’d been through the process far too many times, it seemed.

She handed me my bag. “Thanks for coming in tonight.”

I took it without comment, heading quickly toward the door. The deal done and my shame complete, I wanted to escape before anyone spotted me with my drug of choice.

The door jingled happily as I opened it. I ducked outside feeling like the little bell was laughing at me. Just another addict, shuffling away in shame.

Cool night air slipped over me, soft and fragrant with late spring flowers. I stood on the sidewalk and inhaled deeply, pulling the sweetness into my lungs.

Shame slipped away, pushed out by a potent combination of justifying thoughts and self-promises that I wouldn’t buy any more shoes. Not for at least a year. Or six months. But then I realized I’d need new sandals when the cloying heat of an Indiana summer finally settled over the city.

Sighing, I turned my steps toward my apartment five blocks away, and determined to enjoy the rest of my walk.

One minute, the sidewalk ahead of me was clear, the next, a woman was tumbling to the ground mere inches from my feet.

I jolted to a stop, but I wasn’t fast enough. My black and white sneakers with the cute stacked heels smacked into her legs, sending me sprawling with a yelp. I landed in an ungainly pile, half over the woman and half draped along the sidewalk. My elbow barked at me where I’d scraped it along the concrete and the knee I’d hurt doing HIIT against my best friend’s advice screamed with indignation.

Worse yet, The bag of shoes had smacked the poor woman right in the head. “Oh my gosh! I’m so sorry.” I untangled myself from her and stood, grabbing at my bag. The twisted paper handle caught on her right ear and I yelped again, mortification clogging my lungs and making it hard to breathe. “Sorry! I’m so sorry. Are you okay?”

The woman didn’t move. She lay there with her eyes closed, her flat chest barely rising and falling. Blood puddled beneath her head. Not a good sign. Had I done that with my shoe bag? “I’ll call an ambulance,” I promised her, though there was little indication she could hear me. I dug in my purse for my phone, not finding it for a full minute. Just when my hand felt the familiar smooth rectangle, something clamped around my ankle.

“Ah!” I tried to yank away but the woman’s hand was like a vise on my leg. Seeing her pale, amber eyes fixed on me, I felt relief. “You’re going to be all right,” I told her, pulling the phone out of my purse. “I’m calling for an ambulance.” I punched 9-1-1.

The woman’s eyes closed briefly, then reopened. Her grip on my ankle tightened painfully.

I winced. “You can let go of me now,” I said, my voice only slightly strained. “You’ve got my attention.”

But she didn’t let go. In fact, her grip tightened more. Then her lips moved. I couldn’t hear what she was saying, so I crouched down, dropping to my knees as she finally released me. “What did you say?” I lowered my ear to within a couple of inches of her face. “Say it again.”

The hand that had gripped my ankle found my arm. Cool fingers wrapped around my wrist and the woman’s amber eyes found mine. “Trav…” She stopped, her chest heaving.

She swallowed hard. “Traveler Kitt.” Light flared into the night, as blinding as headlights but brighter. The light hurt my eyes and I squinted, trying to avert my gaze. But I realized the illumination wasn’t coming from the street. It was coming from the woman. Her hand on my wrist felt burning hot, like flame against my skin. I tried to yank away from her but she held on, burning my arm where she touched. A blink later, her body convulsed, arching off the sidewalk so that only her head and heels still touched the ground. Then, in the blink of an eye, the light was gone.

And so was the woman.