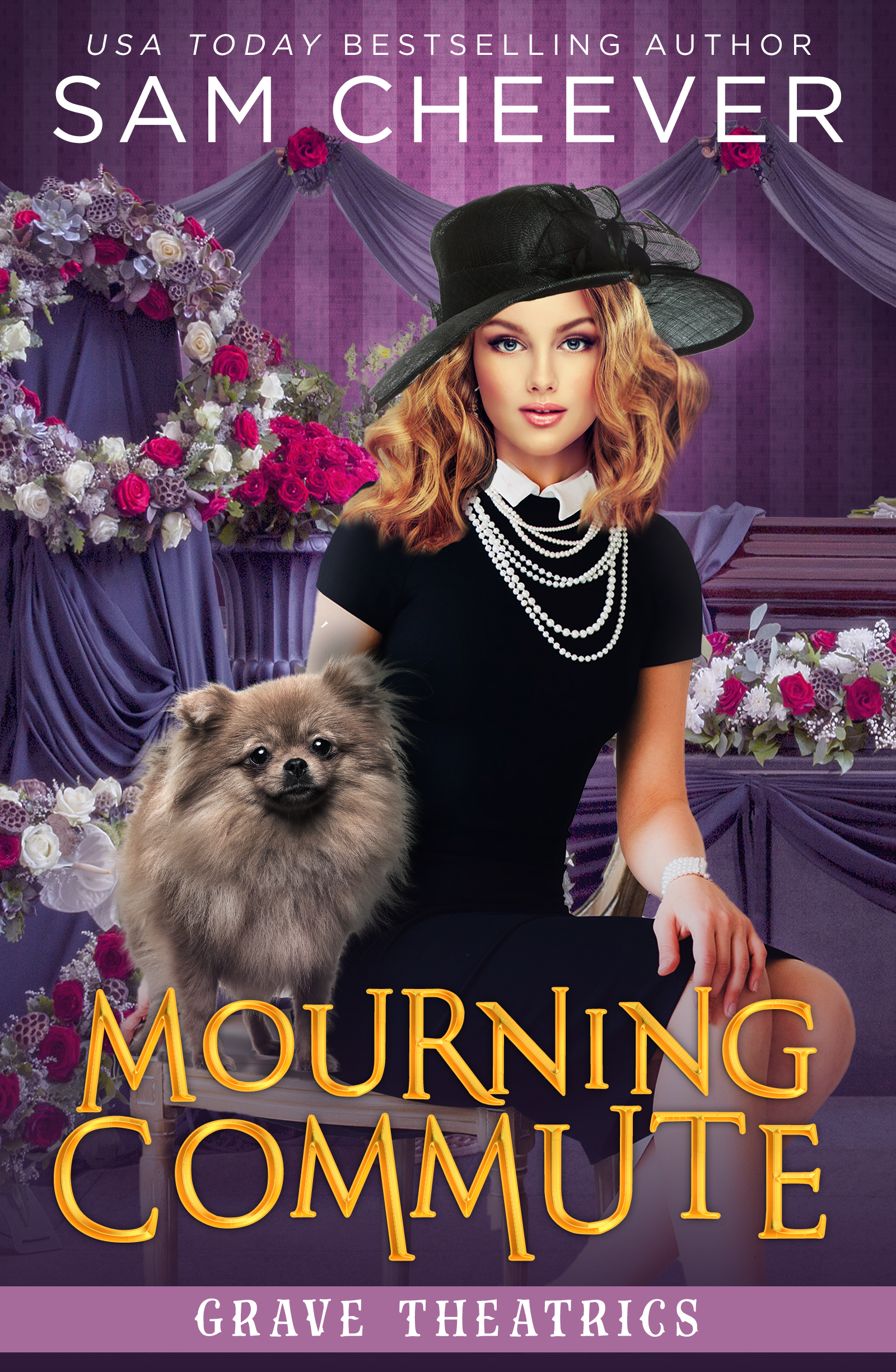 May Ferth just wants to do a good job in her role as fake girlfriend. But there are strange goings on at the funeral. Shifty characters whispering secrets in shadowed corners, and a truly yummy advocate for the dead guy implying that May might have had something to do with his friend’s unscripted exit.

May might be a thirty-three-year-old ex-community theater actress on her second career, but she comes from a family of cops. And, despite her talent for acting, she has a lot more Detective in her than Diva.

The villain thinks he can threaten her and she’ll fold like last week’s panned play. Clearly, he hasn’t read the day’s script changes. May and her little dog Shakespeare are on the case. Though, they might take a little direction from the Private Investigator who believes that May’s client was murdered, and fully intends to prove it.

Tucking the tiny bottle of fake tears more deeply into my tissue, I sniffed daintily. I surreptitiously eyed the assembled crowd of mourners in an attempt to gauge their feelings about the deceased. In my line of work, it paid dividends to know what I was dealing with when interacting with the mourners. My baby blues caught on a handsome, dark-haired man standing back from the rest, and I quickly jerked my gaze away, hoping he didn’t notice me noticing him again.

The man had been staring at me since I’d arrived at the viewing an hour earlier. I would have been pleased by his attention, except that his expression was anything but friendly.

Somehow my eyes kept traveling back to him, all-the-while assuring myself that it was an accident.

Of its own volition, my gaze accidentally slipped back over the spot where the hostile hottie had been, and I blinked.

I yelped, inadvertently gripping the tiny bottle as if it was the only thing keeping me from plunging a thousand feet off a bridge to my death, and then yelped again as I shot a stream of faux sadness right into one wide blue eye.

I couldn’t help wondering why he seemed so angry with me. Surely it wasn’t because I was ogling him at the viewing of a man who was supposed to have been my boyfriend. I gave that one a few beats of consideration.

Accepting his challenge, I placed a limp paw into his and allowed it to be pumped. “MayBell Ferth. It’s a pleasure.” Ugh! I wanted to kick myself. Who says that at a funeral? Jeezopete!

The man’s gorgeous green gaze narrowed slightly, bringing my attention to the thick fringe of black lashes framing his eyes.

I’d do a year’s worth of PiYo classes to have lashes like that. And that was really saying something because I hated PiYo with the power of a thousand suns.

“I don’t believe we’ve met,” he said. But even though it sounded for all the world like a come on, the hostility in his gaze told me it definitely wasn’t.

Nodding, I cast a look toward the open casket across the room and sniffled. “Josh and I had only dated a few weeks.” I could feel Eddie’s gaze on me. It was beyond unfriendly. I couldn’t help feeling as if he was accusing me of something.

Mr. Eddie Deitz was looking at me like I’d been caught standing next to Colonel Mustard in the library clutching the bloody murder weapon.

Nerves jangling under his regard, I shoved a loose dark gold curl back into the chignon I’d forced my heavy hair into for the viewing.

“You dated?” he asked, one dark brow peaking in surprise.

My smile was the perfect mix of sad and nostalgic, with a touch of regret thrown in for good measure. “Yes. I’m going to miss him so much.” He eyed the lump of soggy tissue in my hand, no doubt noting the way all the fibers had melded together into a single slightly scary science experiment with a telltale, bottle-shaped lump in the center.

“Funny.” Eddie Deitz leaned one broad shoulder against the wall, crossing his arms over his well-cut chest. “Josh never mentioned you.”

At that point, I was actually pretty proud of my performance. I allowed tears to leak from my eyes. Both of them. And took a deep, shaky breath. “Our love was new. Delicate. We weren’t talking about it yet.”

Scraping the drenched remains of my tissue under my nose, I tried to catch a glimpse of Eddie Deitz from under my lashes. My “not nearly as thick and long as his” lashes.

He was still eyeing me like I should be wearing prison orange.

Mr. Deitz and I jerked around to find the father of the deceased heading our way. I was torn between relief and guilt.

Had Mr. Mitner caught me ogling the mourners? Well, to be fair, not every mourner. Just the extremely grumpy Mr. Deitz.

Alex Mitner dropped a hand on my shoulder and squeezed it. I fought the guilt, trying to decipher if the squeeze was a silent reprimand. Something along the lines of, “How dare you molest the mourners when I’m paying you to pretend you’re my son’s girlfriend.”

Had he squeezed a bit harder than necessary?

“How are you holding up, May?”

I let a tear slide from my eyes and nodded, sniffling. The smile I gave him was sad, touched with regret, and had a tinge of romantic longing peppered in for good measure.

I think it was some of my best work.

Mr. Mitner seemed to like it. He gave me another squeeze and nodded as if he understood.