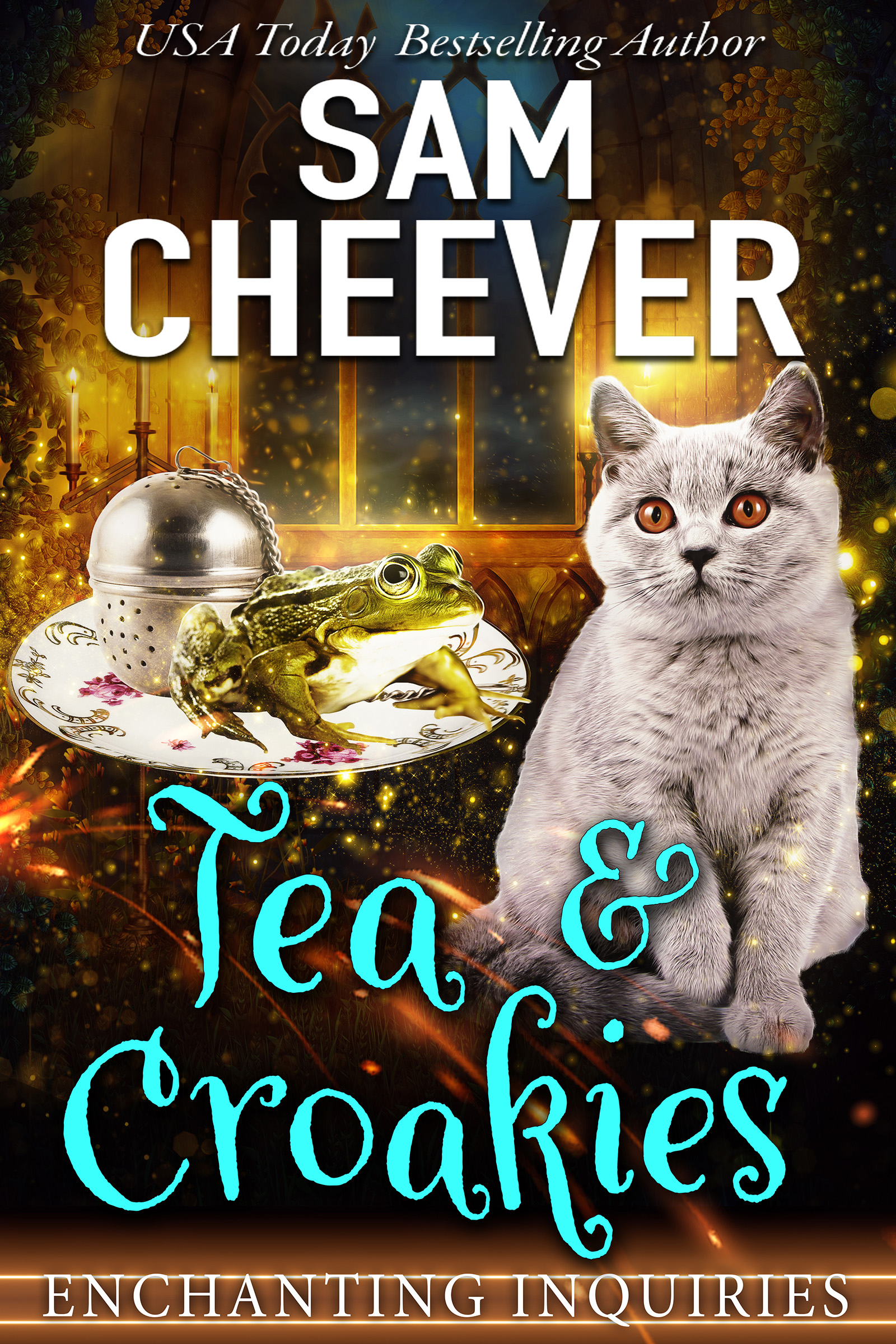 The Frog! A short excerpt from Tea & Croakies!

Something emerged from the shadows. The shape didn’t move like a cat. It wasn’t graceful. In fact, it sort of shuffled rather than walked. I suddenly feared that my sweet kitten had hurt himself. “Are you okay, buddy?”

The shape reached the light and I found myself staring into a pair of bulging black eyes, surrounded by a scaly green head and a fat, squishy body.

I yelped, jumping back in surprise as the frog leaped into the air and thumped against the underside of the shelf.

“A frog!” I squealed, backpedaling as fast as I could on my knees until I bumped up against the base of the counter.

More thumping ensued. Then Wicked’s head emerged and he glowered at me. “Meow!”

I felt strangely compelled to defend myself. “What do you want me to do?”

The cat yowled unhappily, disappearing back underneath the shelf with a final snap of his tail.

I sighed. The frog was clearly stuck under the shelving. Every time he tried to hop out from under there, he bashed against the underside of the shelf. “I just…” I scrubbed a hand over my face, wondering who I could call to extricate him.

“Sprite’s trousers, Wicked!” I exclaimed in frustration. “I don’t touch frogs. You know this. We’ve discussed it at length.” Not that he’d understood any of it. But he seemed determined to force me into touching this one so I felt the need to remind him. “They’re slimy and give me hives.”

I wasn’t sure that latter was strictly true. But panic was making my pulse race and I had to tell myself something.

The poor thing was going to give itself brain damage. Wait. What was I saying? Frogs don’t have brains. Do they?

I repositioned myself on the floor, glancing along the line of shelves. Maybe I could just cut the shelf down the middle so he could hop out.

Growling unhappily. I pressed my cheek against the carpet and looked underneath again. The bulging black eyes seemed to be closer to the edge. Maybe he’d managed to move himself, I thought excitedly. Maybe he didn’t need me after all.

The black eyes slowly blinked and the frog’s body quivered. He looked so sad. I stared into those protruding eyes and something inside me shifted. I felt…pity.

“Trolls boogers,” I murmured unhappily, knowing what I had to do.

I pulled air into my lungs and tugged a wisp of calming magic forward, unsure I’d be able to do it. My hand inched closer and stopped as the black, unfathomable gaze pinned me in place. The frog’s body swelled and shrank as it breathed, and its tiny feet shifted uncertainly as my hand came close.

My fingers twitched. My hand stilled in midair. All I could think about was the last and only time I’d touched a frog. It had been cool and slimy to the touch, and its slime had painted my hand, giving me an unsightly rash that had lasted for weeks.

Nothing I’d done had helped the rash. Until I’d accidentally gotten blasted by a ray of healing magic.

I couldn’t count on a random witch shooting healing magics at me a second time. Or, considering my unhealthy relationship with the Quillerans, a non-random one either.

I sighed, dropping my head to the floor in defeat. “Okay, chillax you two. I’m doing this.”

Before I could change my mind, I quickly extended my hand and wrapped my fingers around the thick, squishy body, jerking it toward me and then releasing it with a squeal and another awkward crawling retreat.

The frog hunched on the carpet, staring at me with its throat working, its puffy body looking iridescent under the overhead lights. I rubbed my hand against my jeans, grimacing, before realizing my hand wasn’t slimy. Not at all. And the touch memory of the frog’s soft, warmish skin still clung to it.

“Ribbit,” the frog said. It gave an experimental hop in my direction and stopped as I twitched with disgust. “Ribbit.”

Mr. Wicked suddenly appeared at my elbow. He gave me soft eyes and rubbed against my knee as I stared in horror at the frog. It had just occurred to me that my trauma wasn’t over. I still had a frog in my bookstore.

“Now what am I going to do with you?” I murmured. I had no idea what frogs needed to live. I wasn’t equipped to deal with amphibians. I was totally a dry land kind of girl. What did they eat? Did they need water to survive?

A spec of black buzzed past me and Wicked’s paw shot up, swiping at the fly. The unfortunate insect dodged sideways to avoid the threatening paw, and flew directly into deadly frog territory.

Quick as a wink, the frog’s tongue snapped out and snatched the fly right out of the air. He seemed to shudder as if even he was disgusted by the action.

“Well,” I said, grimacing. “I guess the food thing’s taken care of for the moment.”

I shoved to my feet. “Tomorrow, I’ll ask Sebille to take you to her family in the woods. You can live on their pond,” I inexplicably explained to the frog and the cat.

With that decision made, I felt better. But just in case, I went into the bathroom and grabbed Wicked’s water dish, filling it up and carrying it out to place in front of the frog. “If you need a drink or…you know…a bath or something.”

I shrugged. “Hey, it was your bright idea to save him. I guess you’re going to have to take this one for the team.”