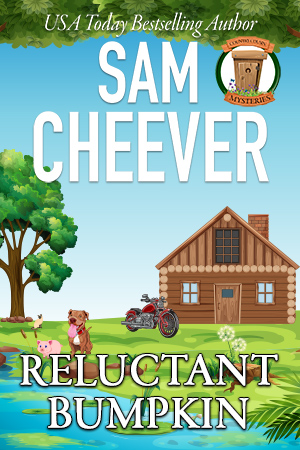 It's an age-old battle–country folk vs city folk–verdant hillside vs concrete jungle–Pickup vs Prius. City folk think all country folk are simple-minded bumpkins. Country folk believe all city folk are rats living in a maze. But some things transcend culture. Some things spoil any lifestyle.

Murder is one of those things…

The sun was high and bright and the day had turned hot. I left Caphy to run free, the leash dragging the ground in case I needed to catch her.

She and her snotty sister explored every tree we passed, teasing the squirrels that chittered angrily from the highest branches.

Unbeknownst to the chirping rodents, LaLee could actually climb the trees if she wanted to. She’d nearly caught one of the squirrels who’d been taunting the pitty from the distant heights of a particularly impressive walnut tree.

Even worse, the cat ignored my shrieking for her to leave the hapless creature alone as only a cat could. After a suitable period of time had passed to prove she was doing it on her own terms, LaLee finally descended the tree, sailing gracefully from branch to branch until she landed lightly in the dirt.

Felines. You couldn’t live with them, and you couldn’t return them for a refund.

I settled into the walk, blissfully inhaling the sweet, hot air and enjoying the pleasant trills and flutterings of a multitude of birds.

The trees provided enough shade to make the heat bearable, but adequate sun to keep the Grimm’s fairytale feeling at bay.

We followed familiar paths that wound up familiar hills and into familiar ravines. After an hour of exploring, the distant sound of the river told me we’d probably better turn back, or I was going to lose one of my frisky companions to the enticement of a cool swim.

The currents in that part of the river were treacherous, and I’d always made it a point to keep Caphy away from it. She got into enough trouble in the pond in front of my house.

As if I’d conjured her from my thoughts, Caphy started barking from somewhere over the next hill. LaLee had been sharpening her claws on the rough bark of a walnut tree, but her head came up and the lazy waving of her long tail took on a more energetic tone.

The first tendrils of unease tightened my chest.

I hurried toward the hill. “Caphy! Come!”

The pitty usually listened to my “mean voice”. Unless there was something more interesting to keep her attention.

LaLee sprinted along beside me as I started to run. The hill was one of the larger ones in the woods. When I’d topped the incline, I found myself standing on the edge of a ravine, the sides steep and treacherous. I all but slid down the first side and then had to scramble and grasp at roots and saplings to make it up the opposite slope.

My voice was breathless when I called Caphy again. “Caphy, girl. Come!”

Somewhere around the middle of the upward slope, the pibl had gone quiet. Already at the top of the hill, LaLee yowled unhappily and hissed.

Icy fear made me quicken my steps. What if Caphy had run into a coyote? The thought was terrifying. I’d heard too many stories of pets being lured away by seemingly playful coyotes, only to be attacked in numbers once they’d gotten them alone.

“Caphy!” My voice took on a strident shriek as panic took me completely over.

LaLee suddenly shot away on an angry yowl, and I nearly choked to death trying to find the air to scream as I scrabbled for purchase on the slippery ravine wall. “LaLee, no! Caphy!”

I shoved myself the last couple of feet, my heart pounding like a piledriver and my hands bloodied from the fight to climb.

My frantic gaze slipped over the woods that was laid out in front of me. I spotted a low form shooting through the trees, agile and fast.

I cried out, an unformed sound built of pure fear. Had that been a coyote? No…please no.

I started to run, my eyes on the fast-moving form gliding too quickly away from me.

LaLee disappeared into the obscuring branches of a huge evergreen ahead of me. I stepped up my speed, catching my foot in a root and slamming to the ground with a surprised cry.

Ignoring the pain in my knees and palms, I shoved back to my feet and started forward.

Something moved to my right and, before I could see what it was, pain exploded on the side of my head. And the ground roared up to smack me.