Tag Archives for " chapter one " 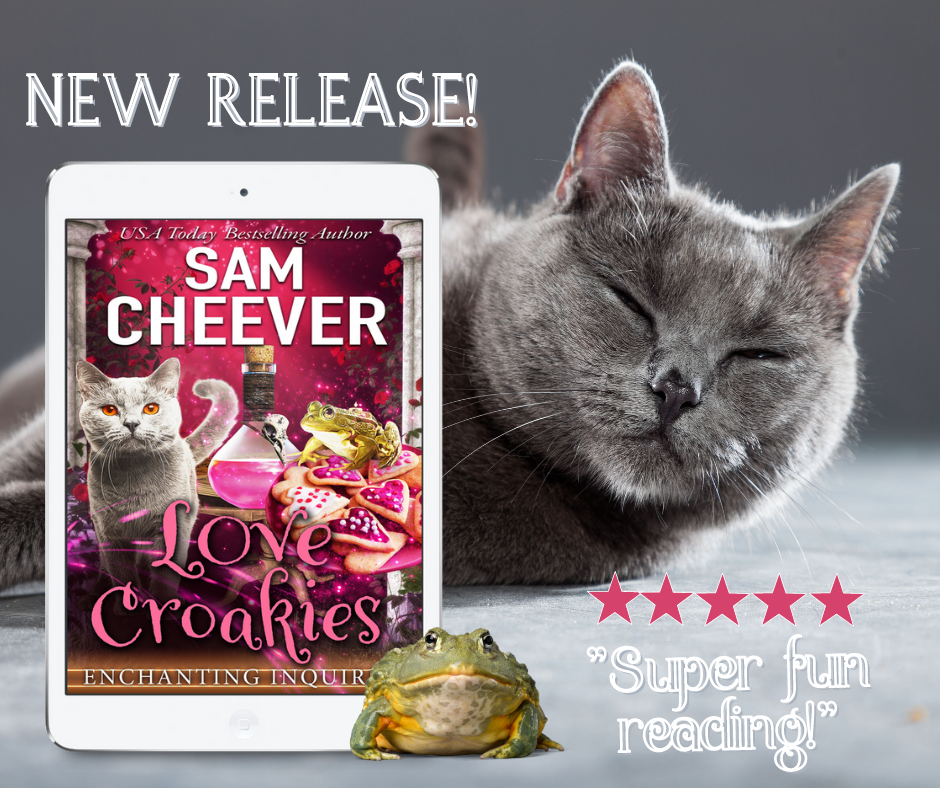 What more could you possibly want in a Valentine's Story? heh

Never let it be said that I have a thing against heart-shaped stuff. Goddess knew I was currently surrounded by it.

Heart-shaped cookies, sans frosting since I’d sworn off frosted cookies after our ill-fated Christmas fiasco, were displayed on a heart-shaped platter with a pink paper heart taped to it proclaiming, “Snarf to your heart’s desire!”

And, right at that moment, a heart-shaped face, peering at me with heart-felt emotion brimming in eyes that reflected a heartbreaking level of devastation from my lack of hearty despair for her heartfelt disappointment.

“But you advertised that ‘Hearts of Bomb’ would be available today,” The cupid’s bow lips said. The heartsick client shook her head, her stick-straight mop of Valentine-colored hair swinging back and forth to reflect her disgust. “You promised.”

I opened my mouth to tell Holly Heartsick that the shipment of books had been delayed, risking another accusation of bookseller heartlessness. Thankfully, the heart-rending announcement was waylaid by the arrival of my own personal Valerie Valentine.

Sebille’s naturally heart-colored hair was plaited into two waist-length braids on either side of her long, freckled face. She wore a matching red dress dotted with white hearts and pink and white striped socks that covered her knees beneath the calf-length dress. Her usual Wicked Witch of the West shoes were the perfect complement to the bad dress and ugly stockings.

By contrast, I wore a plain white shirt, worn blue jeans and white sneakers. My below-shoulder-length brown hair was straight and my dark blue eyes were wary. Valentine’s Day wasn’t my favorite holiday. Yeah, I know what you’re thinking. I don’t seem to like any holidays. That wasn’t true. Exactly. I just haven’t found the one I like yet.

The sprite surged energetically into the bookstore, her sticklike arms wrapped around a plain brown box marked all over with heart-shaped stickers. “They’re here!” Her iridescent green eyes flashing, she grinned at my excited customer, who was currently hopping around and clapping her hands with wholehearted, heartfelt glee.

My shoulders slumped with relief. I grabbed a frosting-free sugar cookie, pink sparkles glittering from its pale surface, and jammed it into my mouth, wishing I had tea to go with it. Sebille settled the box on the table and opened it, pulling out a glossy paperback whose cover was a study in…you guessed it…pinks and red hearts.

Sebille plucked a copy of ‘Hearts of Bomb’ from the box and offered it to my merrily cackling client.

“Yay! I can’t believe it’s here,” Holly Heartface enthused as she did a little happy dance.

I rolled my eyes for two very good reasons.

Number one, though I loved books, and made half…okay a third…all right, a tenth…of my living with the sale of them, I couldn’t imagine becoming so enamored of one that my world literally ended if I couldn’t get my hands on it.

And two, unlike my heart-eyed customers, I knew the author of the book personally and was finding it exceedingly difficult picturing my Uncle Archibald Pudsnecker, a.k.a. Ben E. Nigma, as the type to write a cozy murder mystery with a cutesy name meant to bring to mind a stalky vegetable. Especially since the book that was currently all the rage with my customers was only his second. Pudsy’s first food cozy, “Banana Scream Pie”, had taken the mystery world by storm, selling out its first modest print run and earning two additional runs by the time the new book was released. This was no small feat for a guy whose previous works had included the riveting treatise, “Spatial Voids Around the World” and “The Argument For Embracing The Abyss”.

Sebille and her new best friend shoved me out of the way and I all but ran away from the counter, leaving them to it.

In a desperate move I knew I’d regret later, I shoved another cookie into my mouth. I was going to gain ten pounds before the current Valentine's Day book massacre ended.

“Thanks so much for coming!”

I jerked around at the pleasant, happy sound of Sebille’s voice and caught her waving gaily at her heart-faced bestie as the woman headed out of Croakies with a tin of candies in one hand and her new book in the other.

I swung an arm toward the box. “Just came in. Help yourselves.”

My dour mood didn’t seem to have any effect on their excitement. The gaggle of giggling women descended on the box like a school of piranha and extracted whole handfuls of the books.

Finally, my shopkeeper mojo kicked in. “Only one per person,” I told them. My Valentine’s Day crankiness earned me a trio of scowls, but I yanked the box off the table and held it out for them to replace their extras.

I’d like to say that I was trying to make sure every single one of Uncle Pudsy’s adoring fans got a copy of his latest book, but really, I just didn’t want to face another rabid reader with the bad news that we were out of stock. Again.

Sebille happily made the three sales, doling out candy tins with every purchase, and then sighed with unnatural contentment as the three women left in a dither of excitement. She turned to me and her smile wilted like raw spinach in a hot frying pan. “What’s wrong with you, Dour Dana?”

I started arranging the books atop the table in a happy display of pink and red hearts, my lips curling. “Not a thing, Valentina. Why are you so blasted happy?”

Sebille shrugged, her thin lips curving in an irrepressible smile. “Nothing. I just like Valentine’s Day.”

I looked agape at my usually morose and unhelpful assistant. “Why? You realize it’s a totally made-up holiday, right? It’s a retail holiday, created just for selling stuff.”

“Apparently you haven’t noticed this is a retail establishment?”

I slammed a paperback down on the table with excessive force.

Sebille came over, a half-eaten cookie in her hand and vanilla crumbs painting the corners of her lips. “Still no word from Grym, huh?”

I grimaced and didn’t respond. My fight with the prickly detective was not a subject I wanted to discuss.

Realizing that letting the sprite’s imagination run wild over the bumps in the road of my love life was a recipe for disaster, I sighed. “He’s about as malleable as a…” The thought slid away from my brain and turned to mist. I’d been having trouble holding a cogent thought all day. I blamed the copious amounts of sugar I’d eaten. I’d gorged on two heart-shaped jelly donuts for breakfast, a heart-shaped red velvet cupcake for lunch, two tins of heart-shaped candy, and three of the sugar cookies.

I was mood eating. And, I was in dire need of some of the stalky inspiration from Pudsy’s cozy. Or anything even remotely resembling a vegetable.

“As malleable as a boulder?” Sebille finished for me, snickering. “Granite?” Her snickers turned to guffaws. “A mountain?” She bent double, happy tears pouring from her iridescent green gaze.

I was not amused. “Gargoyle humor. Har,” I said, glaring.

The dividing door opened between the bookstore and the artifact library at the back of the store. A blur of pale pink and white shot into the store and skidded to a stop right in front of me. For a blip, the air around the creature looking up at me with oversized blue eyes was striped with cartoon-like contrails from his superfast arrival. Then the glowy lines on the air sifted away into nothingness.

I narrowed my gaze on Hobs, my resident hobgoblin. “Are you wearing a diaper?”

He laughed, happily bouncing on his oversized toes. “Miss Sebille made it for me. Do you like it?”

My still-narrowed gaze slid to the matching, heart-shaped spots of pale red highlighting his cheeks and then to the tiny bow in his hand. “Please tell me you’re not supposed to be playing Cupid?”

Hobs cocked his head, looking confused. “I’m not supposed to be playing Cupid?” His high-pitched voice was filled with a question.

I sighed and threw a glower Sebille’s way.

“What?” she objected. “Customers will love him.”

The dividing door slammed back on its hinges and Mr. Wicked skulked through, his dark orange gaze wide as he hit my calf with a manic, “Yeow!”

“Hey, buddy,” I said, bending to scoop him into my arms. I buried my face in his fur and sucked a snout full of something small and irritating.

Sneezing violently several times, I nearly dropped my cat. I sniffled, glancing at my hands. They sparkled. “What is in your fur?” I asked him.

Wicked swished his tail. Hard. A tiny growl slid from his throat.

He was all sparkly. Pink sparkly! “Sebille!”

She rolled her eyes. “Uncoil your granny panties,” she said. “He’s fine.”

I sneezed again, placing him on the floor. “You’re killing me with this Valentine’s stuff. What other surprises do you have for me?”

She flipped a dismissive hand. “I’ll make tea. Maybe that will calm you down.”

I looked down at the fat, green squish on the floor by my feet.

He blinked up at me, his eyes blank pools of black, like miniature Pudsy voids.

Get it off me! screamed the irate frog in my mind. Now!

Enormous pink lips protruded from the frog’s sparkly green face. “Oh, Slimy,” I said in a commiserating tone. “I can’t believe she did this to you.” I crouched down and tugged at the lips, expecting them to be made of paper or wax. Instead, realistic-feeling flesh, plumped and puckered, resisted my tugging. I jerked my hand away, straightening on a squeal. “They’re real!” I rounded on the Sprite, who quickly turned away from me when I tried to catch her eye. “I can’t believe you gave him puckery lips! Have you lost your mind?”

She hid a grin behind her hand. “Don’t you get the joke? Kiss the frog, get a prince? Come on,” she said as steam wafted from my ears. “Customers are going to love it.”

I pointed a shaky finger toward the quivering frog. “Fix. Him.”

Sebille gave me a long-suffering sigh and threw a pale green jet of magic toward the frog. The big, puckery lips disappeared with a pop.

Slimy gave the sprite one last indignant, “Ribbit!” and then hopped underneath the nearest bookshelf to work on regaining his self-respect.

“You’ve lost your mind, sprite,” I told her, madder than I’d ever been. Well…in the last week anyway. “What’s going on with you?”

Amazingly, she gave me a secret smile and headed for the door. “I’m taking my break.”

I felt my eyes go wide. “What? You can’t take a break. You just got here.”

She shrugged and slipped through the door, leaving me with one delighted Cupid who I couldn’t let anybody see, a traumatized frog, and a seriously annoyed cat.

I sagged. Could the day get any worse?

Proving that it could, the front door bell jangled and I steeled myself for more shrieking Ben E. Nigma fans. Instead, I found myself looking into a handsome, craggy face and an intense dark caramel gaze. “Oh,” I said, my wit firmly intact.