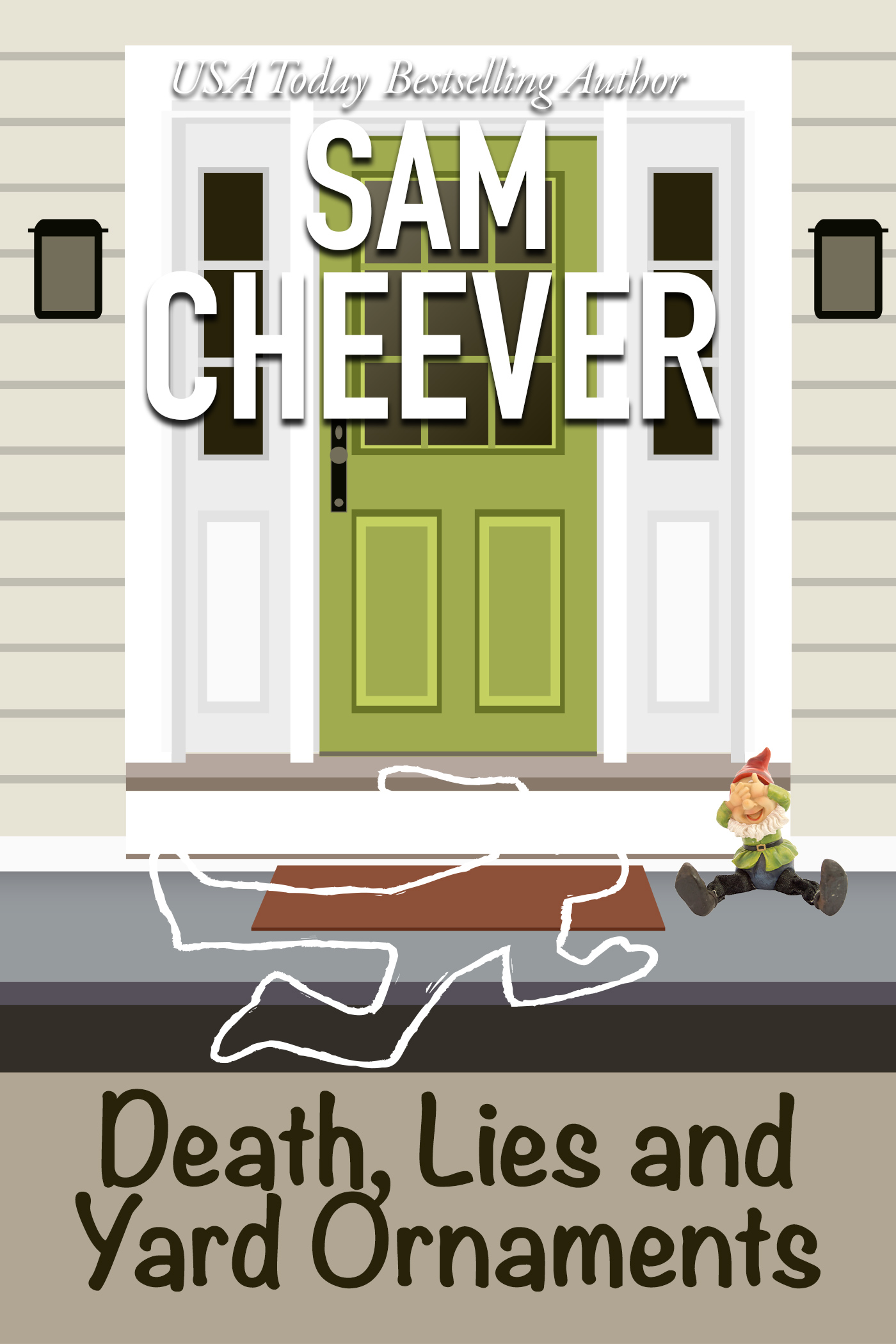 Neighborhoods can be strange and deadly playgrounds.

My name is Dee. I work hard and try to stay out of trouble. But that didn’t stop me from sinking neck-deep into deadly intrigue and larceny. I opened my door one morning and found a dead guy where my newspaper should have been. My first instinct was to call the police. But I quickly squelched that dumb idea. Instead, I slapped on a pair of latex gloves and proceeded to search the body for clues. Unfortunately, I wouldn’t know a clue if it bit me on the latex glove. Well, except for the fist-sized hole in the corpse. That one was hard to miss. Now all I need to do is find out how the guy died, why he ended up on my Welcome mat, who’s throwing rocks through my windows and phoning in threats, and why Ralph the concrete Gnome decided it was a good idea to hook up with the chipped and faded yard Angel down the street.

Death, Lies and Yard Ornaments is currently a stand-alone mystery with a special story behind it. I wrote this entire novel in daily posts to my Super Reader group. It was written a few paragraphs at a time, live and as is. Writing a live story is a supreme challenge, especially a mystery, because you can’t go back and rewrite or rework if you write yourself into a corner!

It was a challenging experience which I hope to do again someday soon.

I was amazed at how much fun it was to write Dee’s and Nick’s story. And being hopelessly hooked on reading and writing series, I walked away from the experience thinking it might be fun to continue their saga with more mystery adventures, which is why I say it’s currently a stand-alone book. Knowing me, it probably won’t have to stand alone for long!

Sam Cheever is purely evil! When I read a mystery I generally try to figure out who is the strongest suspect. It's rare that I'm trying to figure out who's the LEAST suspect to figure out who the murderer is.
This time everyone stayed an equal suspect (unless they died) until the big reveal. And even that one came from a different direction than I thought it would.

A whirlwind of a story, twists and turns that leave you breathless, a heroine who is adorably un-badass and lots of people you just can't assess correctly because not one of them feels really trusty or true - I enjoyed this novella beginning to end!

When I got up this morning, I never expected to find a dead body on my doorstep...

It was especially disconcerting because I didn’t recognize the body…not that I should have of course. I mean, I don’t usually hang out with dead bodies. I’m kind of a loner, but not a freak.

Anyway…I had no idea why he’d be lying face down on my doorstep with a hole the size of my fist in the center of his back.

My shrieking should have woken the whole neighborhood, even at the ridiculously early hour of five AM. But no lights flashed on along my street. No curious gazes peered through windows. No curtains even twitched.

I wound down as I realized the dolphin-level shrieking wasn’t doing anybody any good. The dead guy still appeared to be dead. My screaming hadn’t yanked him, zombielike, back to the land of the living to utter an apology for bloodying up my sidewalk. And it certainly wasn’t helping me. I had a knot in my stomach the size of the hole in the dead guy’s back.

The only thing about not screaming was that it left me with surprisingly little options for dealing with the problem.

At least when I was screaming, I felt like I was doing something.

I glanced up and down the street once more and then took two steps back to re-enter my house, slamming the door on Mr. Dead Guy.

I stood there for a moment, feeling sorry for myself. Why did this stuff always happen to me? I tended to color inside the lines, following the rules. Mostly. And I generally attempted to steer clear of trouble.

Yet there I was, with a corpse draped over my porch.

I shoved messy brown hair off my face and expelled a breath. I was a thirty-year-old professional woman wearing an oversized tee shirt and baggy flannel pants with flip flops. This was what I generally wore all day because I worked from home. My dated, mid-century modern house was in an older neighborhood of similar fifties-style homes on the outskirts of Indianapolis, Indiana. The rest of the houses in my neighborhood were mostly better kept than mine. I didn’t “outside” much. In fact, I hadn’t been outside my house in three days.

I was a drudge…a drone. This type of thing, a.k.a. the dead body on my porch, just didn’t happen to people like me.

I stood in my foyer wringing my hands and wishing there was a handbook to tell me what to do next.

Chapter One, reacting to the dead body on your porch. Shriek like a banshee. Check.

Chapter Two, making the best of the incident. Take stock of your life, lament your clothing choices and then feel sorry for yourself. Check.

Chapter Three, getting blood out of concrete. Nope, I had nothing.