Death and the Diva 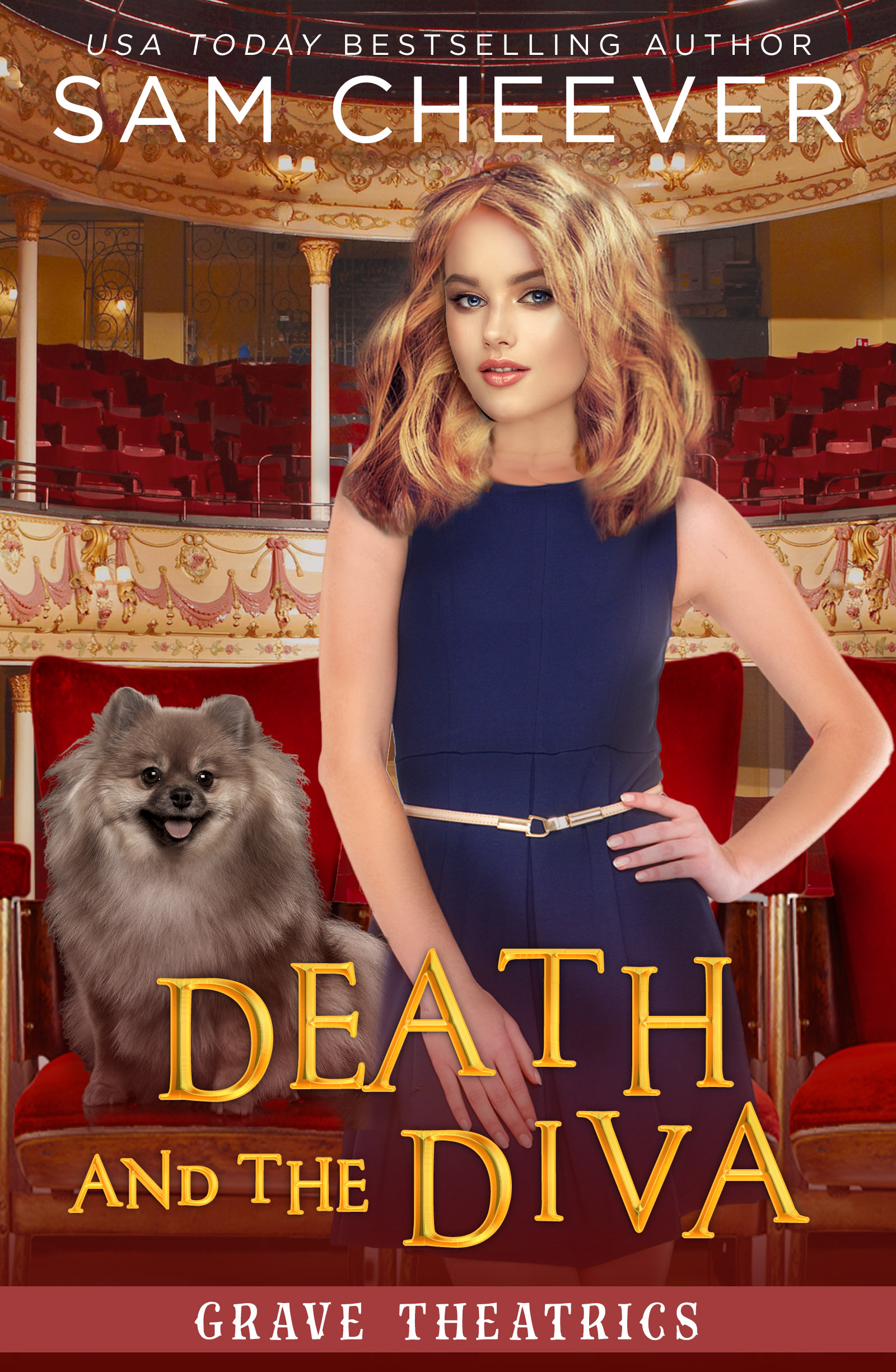 MayBell never expected to bump into her high school drama rival again. But May’s old nemesis has apparently been taking acting lessons. Otherwise, she could never have performed the role of a corpse so convincingly. Oh. Wait…

Asked to take part in a community theatre production for charity, Maybell Ferth thought it would be fun to do something she loved while helping kids in her hometown. But there was a problem.

Patrice Reynolds had been the bane of May’s existence since high school drama class. When she left community theatre behind, May promised herself she’d never let the woman get under her skin again. But fate wasn’t letting her off the hook that easily.

It was just like Patrice to end up dead in a way that implicated May. Her very public battles with the difficult diva shine a light on May as the number one suspect. The only way to clear her name is to put her professional mourning skills into practice at the funeral. With a murder to solve and her own future at stake, Maybell’s acting chops are going to be sorely tested.

"This book is awesome... You do NOT want to miss this newest book, believe me!!! I have just one question....when will the next book be ready to read???????"

Praise for Death and the Diva

This is a great series! Sam Cheever has a knack for humorous, well-written mysteries. The interactions with the Lieutenant and Argh with May’s octogenarian neighbor had me rolling on the floor and I love Doug, her “Dude” neighbor.

Sam Cheever has created another winner of a series! The main characters are really likable and pretty normal. The supporting characters are quirky and add unexpected and enjoyable humor. The mystery is very well done and offers plenty of suspects for investigation. One of my favorite parts of this series is May’s relationship with her family. Even though their interactions are sometimes contentious, (and provide a good amount of the humor in the story), the love and support really shines through!

Imagine my surprise when I walked out onto the stage and saw that someone had left the spotlight on. The sight hit me like a French dessert, a rolling wave of rich chocolate, melting my brain for just a moment. Every pleasure center I had fired at the sight.

A spotlight…my drug of choice.

I’d thought the theatre was empty. In fact, I’d deliberately timed my arrival to pick up my copy of the script, hoping the place would be empty.

Call me a coward if you want. I wouldn’t blame you for it. But since learning that my arch-nemesis, Patrice Reynolds was directing the play I’d happily agreed to take part in, I’d been struggling with bowing out, exiting stage left, shuffling off to Buffalo.

The spotlight grew closer, and I looked down to discover that my feet were moving toward it. It was as if someone had taken the proverbial stage hook to my middle and was reeling me in.

That someone, of course, was me, MayBell Ferth, thirty-three-year-old professional mourner and sometimes thespian. I’d walked away from a very satisfying career in community theatre because I have a diva allergy. In fact, I was allergic to almost everything having to do with acting, except for the actual performances themselves.

Dealing with massive egos and infighting had sucked the love of theatre right out of me. It had given me angst.

And Patrice Reynolds had been the cause of much of that angst.

Patrice and I had been competing for prime roles since high school when she’d shoved me down a short flight of stairs hoping I’d break something to keep me from getting the coveted lead as Tinkerbell in Peter Pan.

Unfortunately for Patrice, I come from a long line of Ferths with good bones. Even more unfortunately for her, Mrs. Mike, the drama teacher, witnessed the dastardly deed and punished Patrice by giving her the worst role in the play. The crocodile.

It took Patrice all of junior year and most of senior year to recover from the humiliation. To this day, she still jumps and gives a little scream when she hears a ticking clock.

But anyway, that’s ancient history. Except, not really. Patrice still hates the sight of me─I nailed the Tinkerbell role to much acclaim─ and I still shudder at the thought of working with her.

I stopped at the edge of the spotlight and looked around, wondering who’d left the light on and why. Had someone been practicing lines? I hadn’t seen anyone when I came into the building. Patrice’s assistant, Manny, had left my copy of the script behind stage, but he wasn’t there.

It had been an exhausting day, and all I wanted was to go home to my cozy little apartment and spring my adorable little fluffball, Shakespeare, from his kennel. I fully planned to spend my evening snuggling Shakes and eating pizza.

A flicker of movement drew my gaze to the shadows bathing the back of the theatre. I hesitated, glancing that way and seeing nothing. Shaking my head, I gave the spotlight one last adoring glance before spinning on my heel. I needed my furbaby and a glass of red wine more than I needed that spotlight fix.

I headed backstage, my footsteps quick and determined. Having made the decision to go home, I was suddenly anxious to leave.

As I stepped off the stage, I jolted to a stop. A cable swayed above my head as if someone had just bumped it. I stood staring at the swinging cable, listening.

The building was silent.

The click of a switch being thrown cast the stage behind me into darkness.

My heart kicked into panic mode.

There was a swishing sound, and my instincts told me to step back into the heavy, velvet drapes surrounding the stage. Breathing as quietly as I could, given that my heart was pounding out a frantic bass beat, I focused on listening. Somewhere in the distance, a clock ticked. I thought of Patrice’s reluctant crocodile, and a nervous bark of laughter escaped my lips before I could stop it.

Footsteps exploded in my direction. The curtains attacked me, wrapping me in a smothering embrace. I swung my arms in panic.

My fist hit something fleshy, and I kicked in that direction. Unfortunately, the heavy drapes kept me from doing much more than grazing my assailant. I fought the dusty air, trying to breathe through the panic.

The dust was choking. When I sucked air to scream, I got a mouth full of velvet and some kind of fiber lodged in my throat.

A violent coughing fit added to my troubles.

As my coughing eased, I could hear heavy, wheezing breaths, as if someone else was having trouble breathing through the dust. Suddenly, the curtains relinquished their hold on me. Footsteps pounded rapidly away.

Panting from fear, I tried to cough up the fiber while fighting my way out of my drapery prison. Once clear, I stumbled in the direction of the nearest light switch, smacking my shin on something along the way.

Finding the switch, I flipped it. Several lights came on with a thud. I spun to look for my attacker and found something worse.

A chalk-white face stared blankly at me from beneath the curtains I’d gotten tangled in. One foot, long and narrow and encased in a soft ballet flat, stuck out of the drapery.

Too pale blue eyes were wide, radiating terror even after death. Blood slipped down the woman’s temple, tangling in the long, curly golden locks she’d always been so vane about. More blood stained the front of her silk blouse.

One hand protruded from a fold in the heavy, crimson drapes. The fingers were bent, two of the fingernails torn and bloody.

For a long moment, I just stared at the woman, knowing it was too late to call for help. And then I sighed, pulling my cell phone out of my pocket and hitting a button from my recent call list.

“Argh,” I said, dreading the next words I’d need to speak. “I found a dead body. It’s Patrice Reynolds.”

My brother sighed, long and loud. “Where are you.”