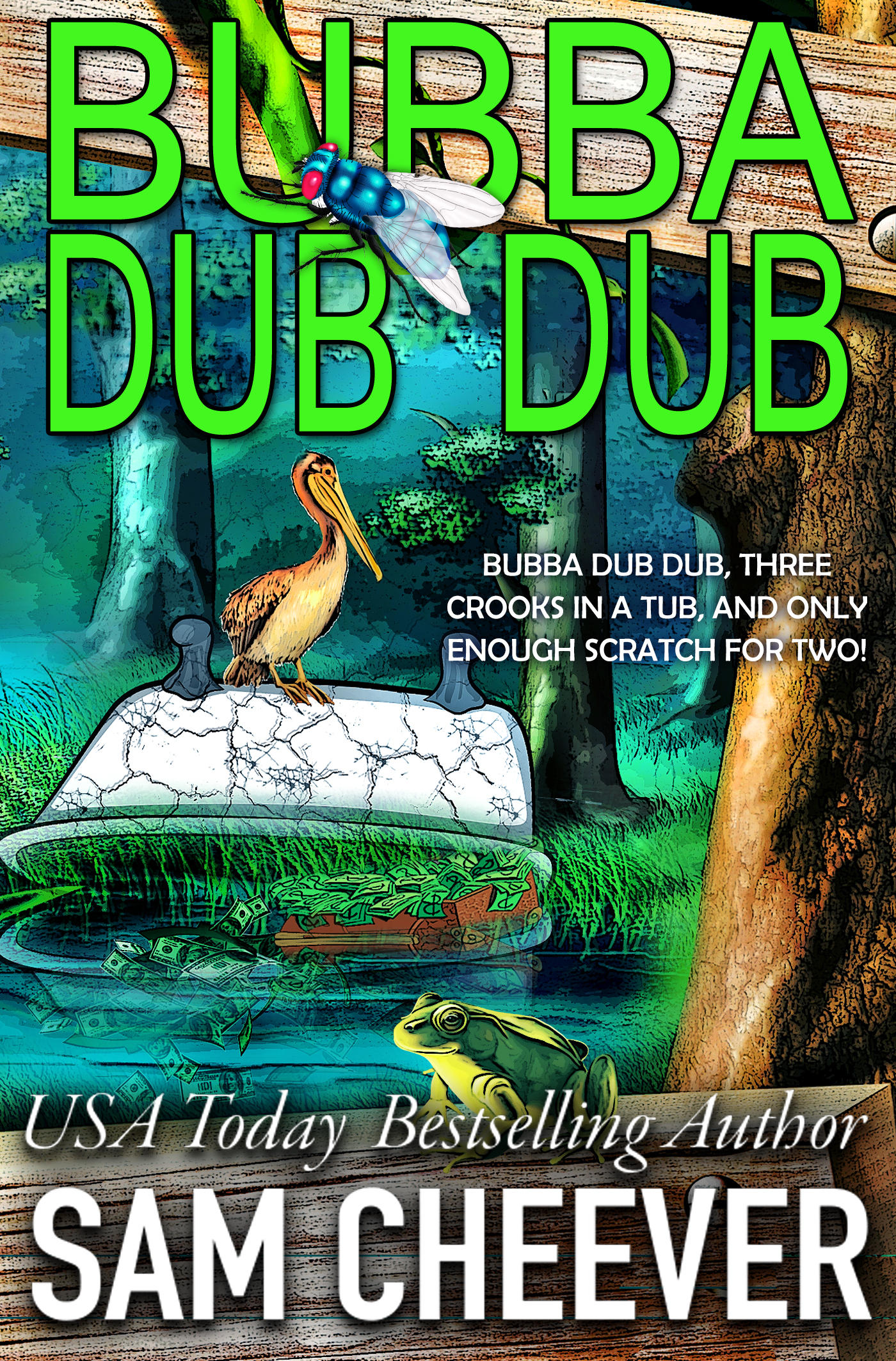 Bubba Dub Dub, three crooks in a tub, And only enough scratch for two!

Felicity Chance returns to Bent, Alabama, looking for a message from her father. Following a trail of clues Felly hopes will help her find him, she enlists the invaluable…and distracting…aid of Bent Society members Irene and Dorrie Tae. Unfortunately, their search is complicated by the usual things—Deputy Cooper has made it his mission to keep a close eye on the three sleuths. The team also finds itself running from the Russian Mafia as well as the local bad guys. Will Felly and the BSers find her father before all the bad guys do? Or will she get bogged down by the swamp, and sucked into the muck of her father’s shady past? 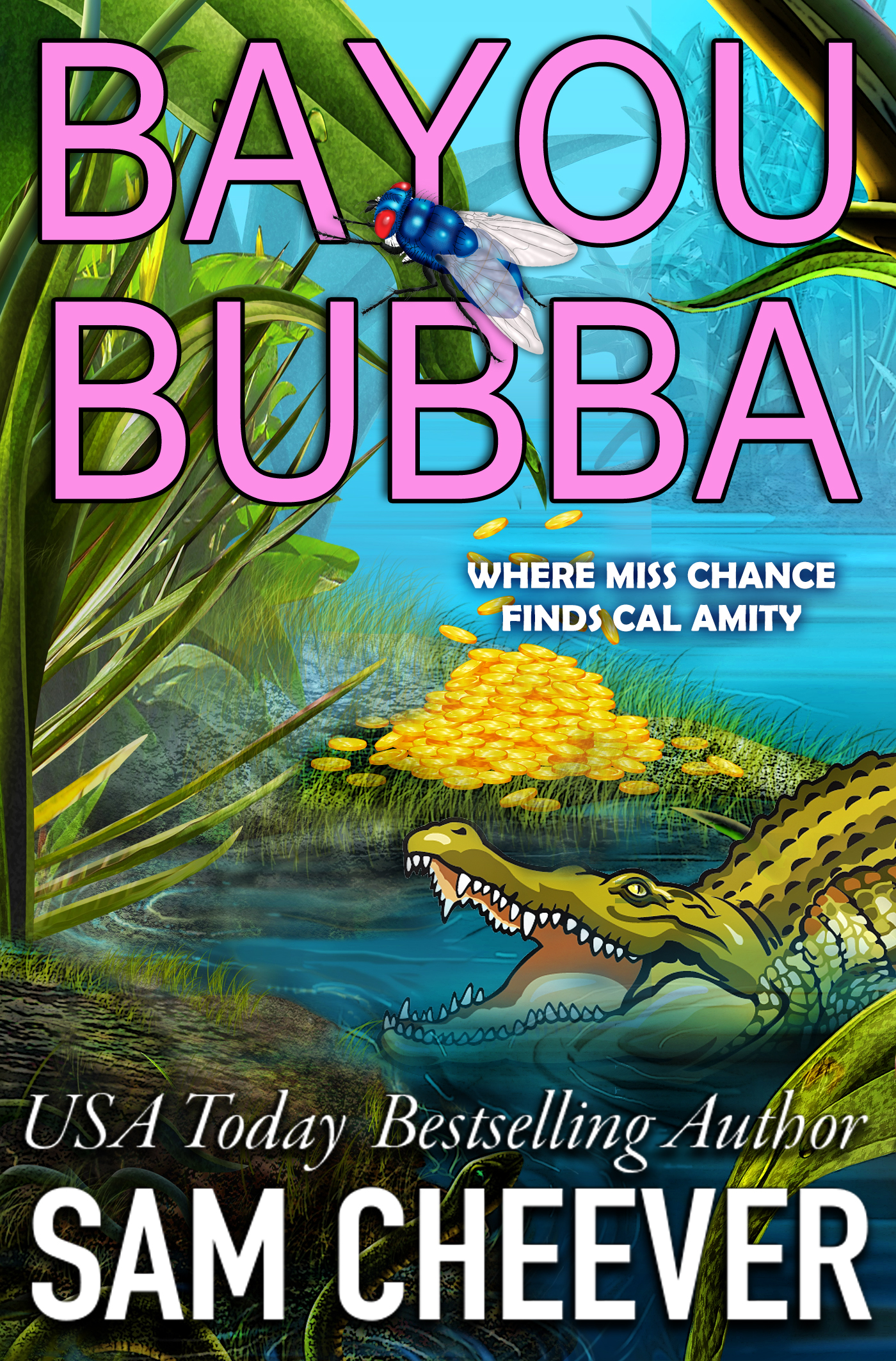 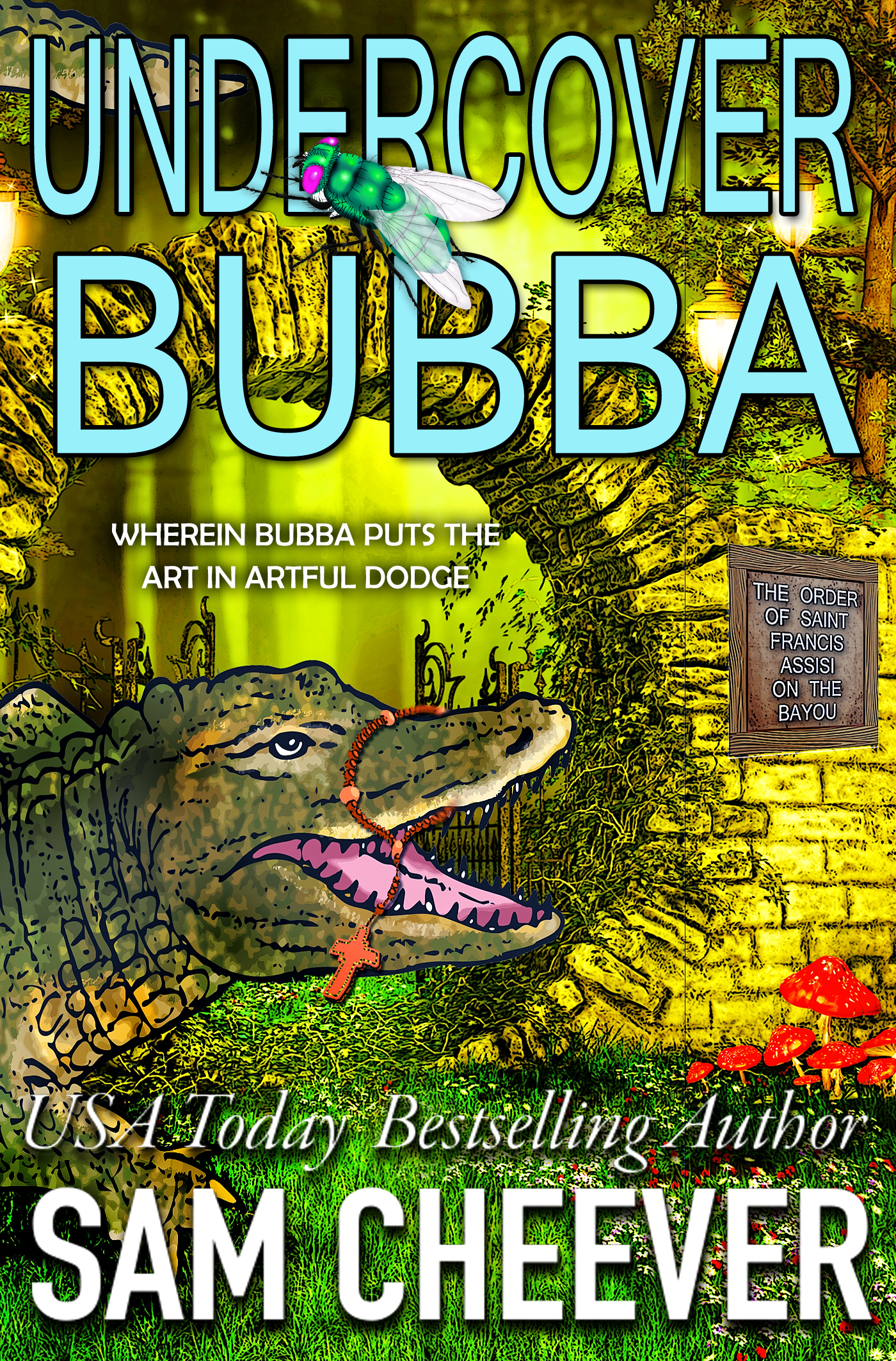 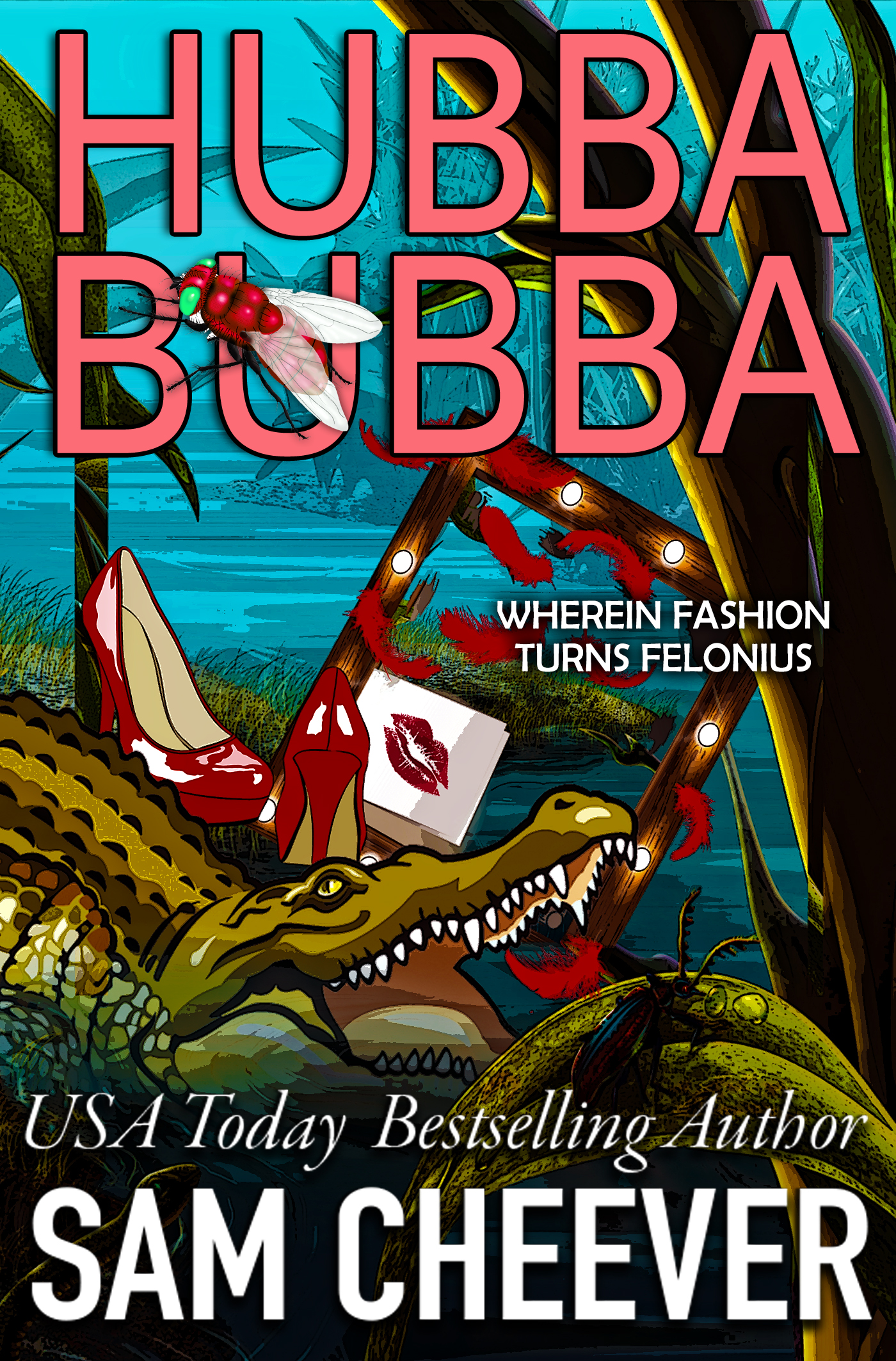 "...this is an extremely entertaining story. I found myself actually laughing out loud more than once. Felly and her two aged cohorts are a hoot!"

"This book is impossible to put down once the reading begins and the twists will have you turning pages, anxious to get to the bottom of the mystery! Did her father actually return to Bent and why would he leave his protection in the first place? Grab your copy today and find out!!!!!!"

Looking back now, I realize I should have never answered the phone. But I suffer from an insatiable need to know who’s on the other end of a ringing phone.

A burst of frustrated air filled the line. “Detective Paul Rouse. The guy who put your dad into protective custody?”

Fear did a little dance on my lungs. I nodded.

“Are you nodding? You know this is a phone right. We’re not doing that Face Off thing.”

“We’re not playing hockey either. It’s called FaceTime®. What do you want, Rouse?” Yeah, the guy had saved my dad from notorious Russian mobster, Nicolai Ruchoff. But he was a jerk of the first order and I didn’t have to like him.

“Whatever. I need to know where your dad’s at.”

“Unfortunately, I’m hearing you all too well. Your speech is an affront to my Masters in English.”

“You got a Masters in English? What for?”

“I ask myself that every day.”

“Just tell me where your dad’s at. Then you and me can go our separate ways.”

“You tell me. The last time I laid eyes on him, he was looking out the back window of that big black car you were driving.”

“You ain’t talked to him recently?”

Silence met my shrewd observation, and I had a horrible thought. “Oh, no. No, no, no, no!”

“How could you have lost him? He’s basically just a flippin’ accountant.”

“He’s very cagey, your dad. One minute he’s soakin’ in a bubble bath and the next, he’s in the wind.”

“Crisis on a cracker! Please tell me you didn’t fall for the bubble bath scam?”

I reached up and tugged on my hair, one dangling preposition away from going full frontal crazy on the guy. “I don’t bleepin’ know where he’s at! But you’d better find him. Because if Ruchoff finds him before you do, he’s a dead man.”

“Okay, okay. Don’t bust somethin’. I’m sure we’ll find him. He kind of stinks at hiding.” Rouse laughed. “The last time he pretty much laid a trail of crumbs for me to follow.”

“Funny how you couldn’t find or follow those crumbs until my PI found him first.”

“Minor detail. Hey…by the way…you got that PI’s number you could give me?”

I disconnected with a mumbled swear and started to pace, my mind racing. Where would my father go? Rouse was right about one thing, Felonius Chance was cagey. He was cagey enough, in fact, to do exactly what nobody expected him to do.

He couldn’t take a flight anywhere. The feds would be onto him in a heartbeat. They’d also have the bus lines and train stations covered. He couldn’t use the ID they’d given him, and he couldn’t use his real name. He’d have to sink into the background…become white noise.

He’d gone south before, burying himself in the Bayou. The Marshals would no doubt expect him to go an entirely different direction this time. Maybe travel north, crossing the border into Canada.

I shook my head, grabbing my cell phone. My father would follow his initial instincts to get lost somewhere nobody wanted to look for him. But first, he’d want to touch base with me, because I’d told him I’d be really mad if he got himself lost again without finding a way to notify me. I thought I knew what form that notification would take. It was a long shot, but at least it was a place to start.

I quickly dialed Cal’s number and headed into my closet to pack.

He answered on the fifth ring, right before I gave up and disconnected. “Hey, Felicity. We still on for dinner Saturday?”

Heat filled my cheeks at the reminder. I’d been bleaching a lot of brain cells over the last few days, trying to forget about that date. I had no idea what I’d been thinking when I’d agreed to have dinner with my way-too-tempting PI. I was sooo not ready to get into an emotional clinch with Cal Amity. “Probably not. I need to hire you again.”

I told him about my father disappearing.

I pictured his stern, implacable expression in the silence that followed. “Why would he run away from witness protection? Does he not understand how dangerous Ruchoff is?”

“He understands completely, which is why he probably ran. If he testifies against the mob, they won’t stop until they kill him.”

“They’re not going to believe he won’t talk. As long as he’s alive, he’s a threat.”

I swallowed the fear Cal’s unbending observation caused. “That’s why we need to find him, Cal. We need to try to make him see reason.”

“Do you have any idea where he might be?”

Finally, I thought, a man who knew how to ask a proper question without something ugly dangling at the end of it. “I think I might. Or at least I know where he might leave me a message for me.”

“Where?” Movement noises told me Cal was jumping into action. I smiled. I really loved a man of action—especially one with bedroom eyes the color of the ocean and silky midnight-colored hair.

“Pack your shorts and sunscreen, Cal. You and I are heading back to Bent.”